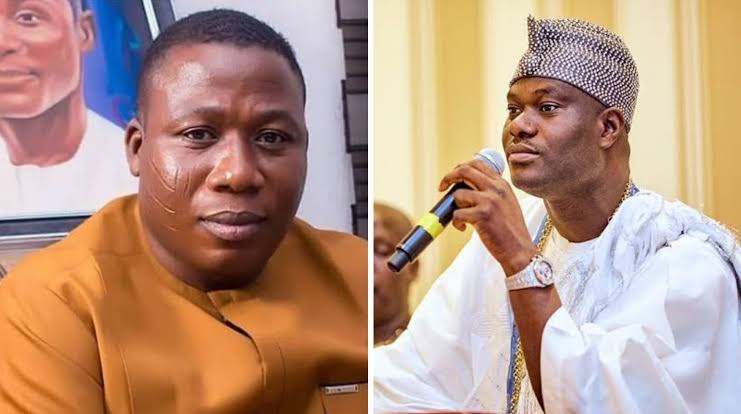 Ooni of Ife to Sunday Igboho: You are forgiven and you still remain the son of the soil

Recall that Yoruba activist, Igboho had earlier declared that Ooni disappointed Yoruba nation for not speaking the truth on herdsmen killings in South West during a recent visit to President Muhammadu Buhari.

Hours after Sunday Igboho declared Ooni of Ife as Fulani slaves, the Oduduwa Republic agitator apologised on Wednesday in a viral video.

He said: “He has forgiven him as he had tendered an apology via a video clip he produced via social media yesterday evening.

“Before tendering the apology, it was the Olugbon of Ile-igbon that first called and informed Arole Oodua on the phone that he had scolded Sunday on phone on his misdeeds and that, he would soon tender an apology to him on the matter. Sunday Igboho later released a video in which he tendered the apology.

“Even though the way and manner, Sunday behaved was sacrilege to the Oduduwa throne but he has already apologised and I can confirm that Arole Oodua forgiven him, because, there is no perfection in humanity. Sunday is a human being like a normal human being who could misbehave as well”.

He went on: “As the father of all, the Arole Oduduwa Olofin Adimula, Ooni Adeyeye Enitan Ogunwusi Ojaja II remains his father who had even identified with him in the past two weeks he has begun with the struggle and he is still solidly behind him for the liberation of the Yorubas from criminal herdsmen who have adamantly terrorised our land.”