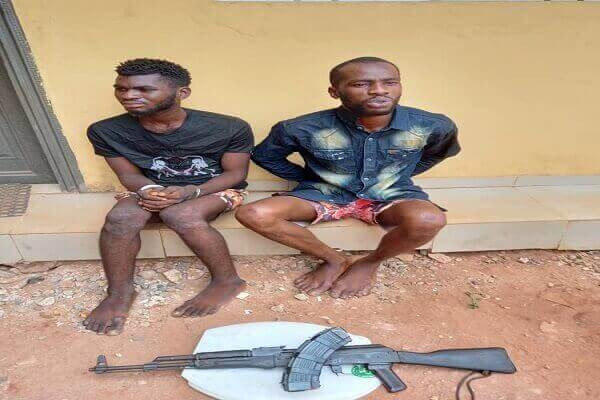 Men of the Anti-kidnapping and Cybercrime Unit of the Edo State Police Command have arrested two notorious criminals on its most wanted list.

The suspects, Samson Ibiweh and Philip Chirer, were arrested along Ofunama Road in Ovia South-West local government area of Edo state while on their way to Ofunama forest to blow up the Petroleum Pipelines to enable them to siphon the products for sale.

Alenkhe said that one of the suspects Samson Ibiweh belonged to a gang that earlier kidnapped a prominent Oil worker along Siluko Road in Benin city, EDO State. The operation which took place in 2016 claimed the life of the driver of the oil worker.

Similarly, the suspect allegedly sponsored an armed robbery syndicate that attacked and robbed the Etisalat sales outlet at Ibiwe Street in Benin City. In the violent operation, some persons were fatally wounded, and millions of naira carted away. Some of the suspects were arrested and arraigned in court in 2016.

The suspects, who were driving in an Audi 80 car were intercepted and searched, recovering a military rifle and live ammunition.

In an interview, one of the suspects Samson Ibiweh told Standard Gazette that:

“I was holding the gun to protect ourselves against security invasion when we are blowing up the pipeline. I was earlier arrested by the police for armed robbery and charged to court. However, the complainant did not come to court to give evidence; hence the court released me. l was going for this operation because l need money to offset some bills.”

The suspects are expected to be arraigned in court after the completion of investigation.