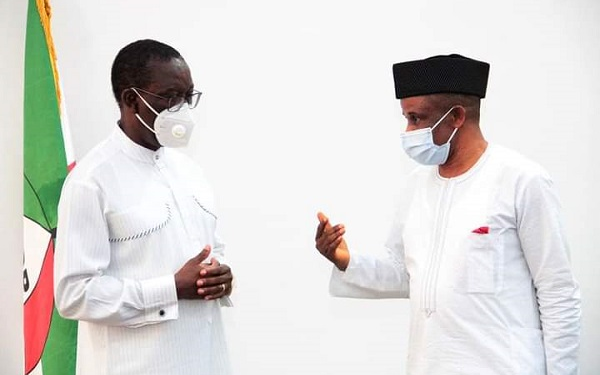 Delta Gov Okowa laments NDDC road projects, says they are embarrassing and disservice to the region

Describing the road projects as emergency ones, Okowa stated that such projects constituted an embarrassment and a disservice to the region.

This statement was made by the state governor while receiving the interim administrator of NDDC, Mr Effiong Akwa, in Asaba, the state capital.

He urged the management of the commission to focus on the development of Niger Delta.

To him, development projects must impact positively on the region and its people.

Okowa said: “For the sake of sustainability, everything we do must be sustainable because I have seen roads done under emergency projects that failed under three months.

“The NDDC should spend more money on bigger projects that connect communities and with the capacity to impact on the people. We hope that as leaders of the Niger Delta that the NDDC truly live up to its expectations.

“For that to happen, there must be a partnership and a collaborative effort in the best interest of the region.

“The NDDC is supposed to be an interventionist agency but because of politics, we have continued to allow ourselves to be caught in the web of competition which ought not to be.’’

The governor recalled that there was a master plan developed by the commission in collaboration with the states, which ought to have been used to properly develop the zone.

He advised the interim administrator to do something while in office that he would be remembered for.

“I don’t know how long you will be there, but try to make a mark for yourself while your stay lasts.

“When you satisfy yourself that you have done well according to your conscience, then, you can leave the office a happy man.

“I am glad that you have met my brother governors. I am also of the opinion that the Presidential Advisory Committee on NDDC should meet with the management of the commission to look at further ways we can collaborate to develop the region.

Akwa had told the governor that he was in Asaba as part of his engagements with key stakeholders in the region and to share with him, his plans for the region.

He lauded Okowa for his administration’s efforts in empowering the youths of Delta.