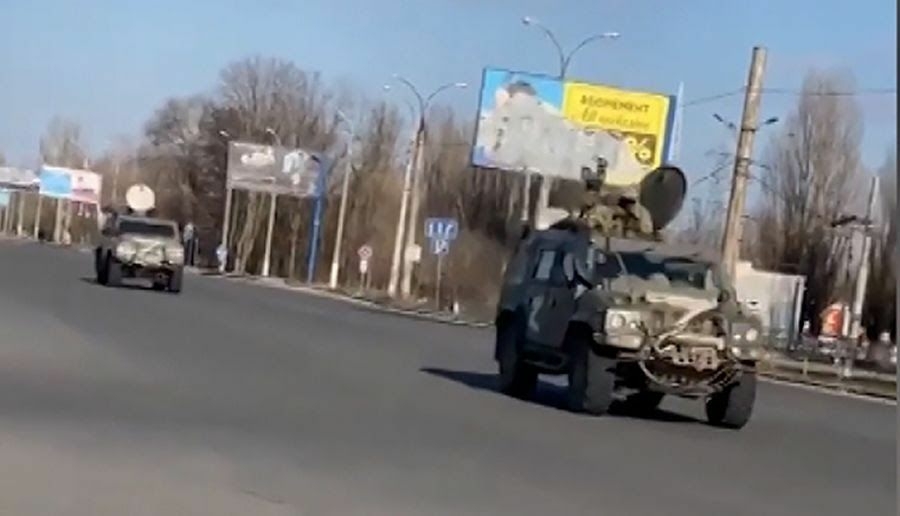 On 21 February 2022, the Russian Federation Council unanimously authorised Putin to use military force outside Russia’s borders. Two days later, Russia launched a large-scale invasion of Ukraine, its neighbour to the southwest, marking a dramatic escalation of the Russo-Ukrainian War that began in 2014. Putin announced a ‘special military operation’ in eastern Ukraine; minutes later, missiles began to hit locations across Ukraine, including the capital, Kyiv. What does this mean to Africa and Nigeria?

Russian President Vladimir Putin announced a military operation in Ukraine early Thursday, which began with a series of missile attacks and the use of long-range artillery. It quickly spread across central and eastern Ukraine as Russian forces attacked the country from three sides.

President Putin has frequently accused Ukraine of being taken over by extremists ever since its pro-Russian president, Viktor Yanukovych, was ousted in 2014 after months of protests against his rule.

Russia then retaliated by seizing the southern region of Crimea and triggering a rebellion in the east, backing separatists who have fought Ukrainian forces in a war that has claimed 14,000 lives. Late in 2021, Russia began deploying big numbers of troops close to Ukraine’s borders, while repeatedly denying it was going to attack then. Mr Putin scrapped a 2015 peace deal for the east and recognised areas under rebel control as an independent state.

Russia has long resisted Ukraine’s move towards joining the European Union and the West’s defensive military alliance, NATO. Announcing Russia’s invasion, he accused NATO of threatening “our historic future as a nation”. Putin does not want his neighbouring country to join his enemies as he feels threatened by the western romance towards Ukraine.

Despite the geographical distance, there are important ties between Ukraine and Africa, including more than 8,000 Moroccans and 4,000 Nigerians studying in Ukraine and over $4 billion in exports from Ukraine to Africa.

Although some African countries may benefit from a shift in global markets away from Russia due to the crisis, the short-term potential impacts on economic livelihoods are worrying while the implications for pan-African solidarity and adherence to multilateralism are increasingly uncertain.

Several other countries could similarly benefit from Europe’s energy diversification, including Senegal, where 40 trillion cubic feet of natural gas were discovered between 2014 and 2017 and where production is expected to start later this year.

Nigeria, already a supplier of liquified natural gas (LNG) to several European countries, is also embarking with Niger and Algeria on the Trans-Saharan Gas Pipeline to increase exports of natural gas to European markets.

Despite these possibilities, in the near term, the invasion of Ukraine could pose hardships for African households, the agricultural sector, and food security. The rising price of oil on global markets induced by the crisis in Europe will have a direct impact on the cost of transport. Economists have warned that the war in Ukraine could further push oil prices up and increase inflation in Africa.

What does it mean for Nigeria?

The Nigerian government on Thursday said it has received surprise reports of the invasion of Ukraine by Russia. The West African Country, however, did not condemn the Russia invasion unlike many countries like the U.S.A and the NATO allies have condemned the invasion and imposed sanctions on Russia.

Nigeria’s stance that Russia’s attacks are targeting only military installations in Ukraine. However, Nigeria’s federal government posits that it was willing to evacuate its citizens from Ukraine.

The Federal Government has met with envoys of the G7 countries in Nigeria, expressing worries over the Russian-Ukraine conflict with a call for peace to resolve the conflict.

Minister of Foreign Affairs, Geoffrey Onyeama, met with the envoys on Friday in Abuja, saying that the Nigerian government called for peace and the use of diplomacy in resolving all differences.

Onyeama said Nigeria does not condone the approach of aggression by Russia, calling on Russia to pull back.

Russia has played an increasing role on the African continent in diverse ways. Trade, aid, military training and paramilitary security. the future of this long-lasting relationship will be tested by the current crisis between Russia and Ukraine.

On Wednesday morning, the Minister of State Petroleum Resouces, Timipre Sylva, was queried by a Bloomberg reporter if Nigeria can heed to the calls from the United States on replacing Russia’s gas once sanctions begin to take place. The Honourable Minister responded by saying he was not privy to that conversation and reiterated that Nigeria does not have the infrastructure for that gas distribution. Herein lies the missed opportunity. Nigeria makes up the top 10 countries with the largest gas reserves in the world, and as reported late last year, the Nigerian government discovered 206 trillion cubic feet of gas accidentally while searching for oil.

Nigeria has failed to live up to its title as the Giant of Africa and the Largest Oil producer in Africa. The country has missed out on oil earnings because of underperforming production capacity. Joe Biden is not expected to target Russia’s crude oil and refined fuel sector with sanctions due to concerns about inflation and harm it could do to its European allies and oil markets.

The recognition of breakaway parts in Ukraine would bring light to Biafra agitation that has rocked Nigeria for a couple of years now. IPOB’s consistent calls for separation have seen different “mini-government’s in the South-Eastern states. It’s been reported that there are unauthorized stay-at-home orders in solidarity with the separation calls. The growing secession movement would affect the sovereignty and legitimacy of the Nigerian government as we have seen in Ukraine.

How Being a Pan-African Hurts?

Finally, while most attention has focused on the implications of this crisis for trans-Atlantic relations and NATO unity, the invasion of Ukraine presents a significant test of the concept of pan-African solidarity and regionalism. In recent months, the set of institutions intended to represent this solidarity from the African Union (AU) to the Economic Community of West African States (ECOWAS) as well as the Southern African Development Community (SADC) have been undermined by conflicting views among heads of state over how to handle the spate of coups in the Sahel and rising insurgency across the continent.

More generally though, the conflict has put many African leaders in a difficult position and attempting to forge a neutral position. South Africa’s neutrality had for weeks frustrated EU and Ukrainian diplomats who nonetheless recognize its special role with Russia via the BRICs (Brazil, Russia, India, China, and South Africa) grouping of middle-income countries. Only after the invasion on Thursday did the South African government finally take a stronger stance, calling for Russia to withdraw its forces. Significantly, the Nigerian government only noted its surprise about the invasion but neither condemned it nor called for a cessation of hostilities.

More broadly, African governments have shown growing interest in building relationships with both the West and the East in order to diversify trade, investment, and aid options. Russia has reasserted itself in recent years through both security and economic influence on the continent. China, which appears to have tacitly condoned the invasion, has of course been a major presence in the region for the last decade, investing close to $3 billion in 2021 alone.

There is minimal interest in returning to an era when African leaders needed to show allegiances to a Cold War power. Yet, given the outright invasion of Ukraine and the violation of international law, the key question now is how African governments will maintain their relationships with their diverse set of external partners and with one another as the geopolitical context dramatically shifts.