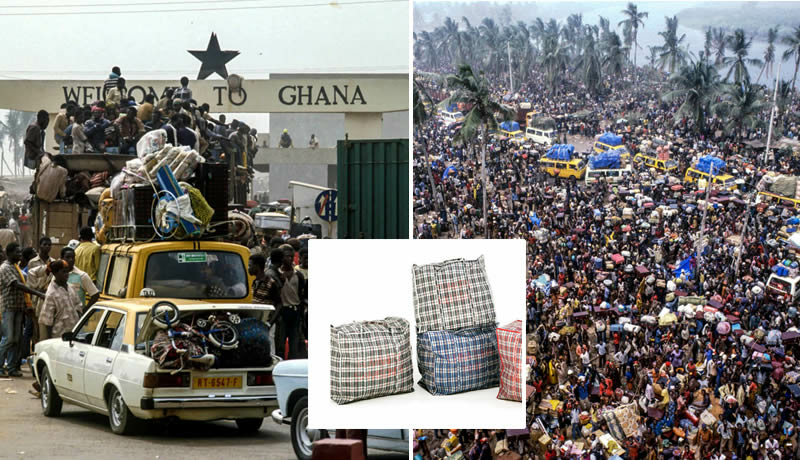 “Ghana Must Go” – a phrase synonymous with the famed African zipped tote bag, used during the mass exodus of Ghanaians from Nigeria. The bag, made from cheap woven mat (with plaid designs: red-blue-white patterns) is used by the people to move their belongings mostly when travelling. There is hardly any bus park where you won’t have at least one of these bags used by a passenger to move their goods.

The bag got the moniker “Ghana Must Go” during the deportation of Ghanaian immigrants from Nigeria in the 80s. A time where lovers and allies became ‘enemies’.

The year was 1983 and an executive order from Nigerian President Shehu Shagari had been announced, forcing undocumented immigrants to leave the country, else they’ld face arrest. As a result of Shagari’s order, over two million migrants were deported, including one million Ghanaian nationals.

The deportation order was largely due to atrocities committed by many of these African immigrants in the country. According to historical events, notable of these atrocities were:

The Nigerian government through the Ministry of Internal Affairs got into action immediately. On the 17th of January, 1983, the Nigerian Minister of Internal Affairs, Alhaji Alli Baba, announced the immediate expulsion of all illegal immigrants in Nigeria within two weeks; an executive order endorsed by the President Shehu Shagari. He also threatened all concerned with the statement.

An Act of Justice or Reprisal ?

The deportation order made by the Nigerian government was seen as an overdue and necessary retaliation by some schools of thought, including Africans. Why?

There had existed an old political fraca in the Nigeria-Ghana political relationship in 1969. Back in 1969, the then-Ghanaian prime minister, Kofi Busia, invoked the Aliens Compliance Order which resulted in the deportation of an estimated 2.5-million undocumented African migrants, the majority of whom were Nigerians. These were Nigerians who had built their businesses and life in the ‘Gold-Coast’ region, even outwitting the Ghanaians in business.

The Nigerians had grown-enterprises, their business acumen sharper, to the detriment of Ghanaian businesses. Even in Ghana’s instability, Nigerian traders managed to have everything and at cheaper prices to the envy and annoyance of Ghanaians. The Aliens Compliance Order shook the Nigerians affected, majority of whom were Yorubas. Most had intermarried, and had traced their roots back to trade relationships between the two west-african neighbours, even pre-colonial rule.

This move by the Ghanaian government, threatened the good relationship between Nigeria and Ghana, who before then were good allies.

It should also be noted that there was diplomatic tension between the Shagari led government of Nigeria and the Ghanaian military government of Jerry Rawlings. President Shagari was a good friend of Ghana’s former president, Hilla Limann, whose government Rawlings had overthrown.

The deportation of Ghanaians culminated in a love-lost between the two African giants, during that period. Thankfully, the relationship between Nigeria and Ghana has improved since the events of 1983, although tensions had occurred in recent times between trade unions of both countries.

The United States State Department described Nigeria’s actions as “shocking and a violation of every imaginable human right”. Pope John Paul II called it “”a grave, incredible drama producing the largest single, and worst human exodus in the 20th century”.

A letter sent to the Nigerian High Commissioner in London by British politician Michael Foot, described the deportation as “”an act of heartlessness, and a failure of common humanity”. Prime Minister of South Africa P. W. Botha also criticized Shagari in the situation, comparing him to Adolf Hitler and other white right-wing groups said it was worse than apartheid in South Africa.

After the sudden decree by the Nigerian government in 1983, all foreigners without papers were thrown into a state of shock, fear and trepidation. Over 1 million Ghanaians were thrown into confusion and indecision as they weren’t even ready to return to their crisis-engulfed country, which was actually the reason many had fled to Nigeria in the first place. It was even rumoured that the Nigerian government had given power to Nigerians to confront any alien after the ultimatum given to leave, hence the phrase “Ghana Must Go”.

Many of these deported immigrants fled the country without their luggage while those who could pack their belongings used a particular distinctive bag which happened to be the big called ‘Ghana must go’ bag. Since then, the name has spread around the Nigerian populace and has been used as a popular travelling bag.

The iconic red-and-white and blue-and-white patterns bag is used in Nigeria, Ghana and many countries in the world. In Ghana, the bag is simply referred to as Ghanaian sack or “Efiewura Sua Me”, literally “help me carry my bag”.

The bag has a variety of other names- in Germany it is called the “Türkenkoffer” (Turkish suitcase), in the US, the “Chinatown tote”, in Guyana, the “Guyanese Samsonite”, and in various other places, the “Refugee Bag”. It is often associated with and used for migration. 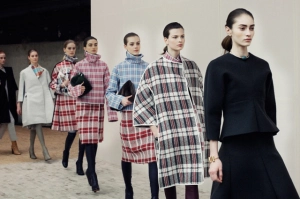 Italian designers such as Celine, Marc Jacobs and Louis Vuitton have glamorised the famous Ghana-must go-print. There was a high fashion version of the bag, produced by Louis Vuitton in 2007. The pattern has also made its way into clothing design.