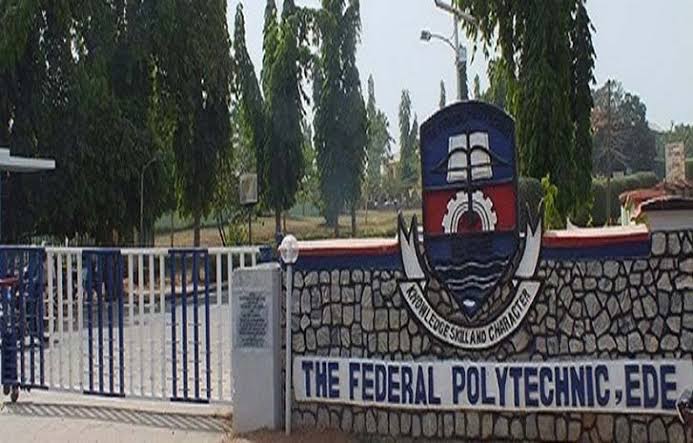 The authorities of Federal Polytechnic Ede in Osun state on Sunday debunked reports stating that fees payable by the students have been increased.

WITHIN NIGERIA learnt that, on sighting the increment of tuition on the school portal, the students kicked against the development, while calling on the management to jettison such decision.

The students had also alleged that the Rector suspended the newly elected Independent Students Electoral Commission Chairman of the Students’ Union, describing it as a plot to proscribe the Union.

The development is coming weeks after the management of the school proposed e-voting system for the Students Union Election.

But, despite sighting the tuition increment on the school portal, a release by the Dean, Directorate of Students affairs, Dr Omotosho O.S on Friday stated that there is no iota of truth in the report of increment of fees.

Tobi, a student of Accountancy told our reporter that “ we saw the increment on our schedules, the management is just playing game.”

Another student, said the Rector authoritatively told the students that he has suspended the ISEC Chairman, alleging that it was a ploy to proscribe Students’ Union.

Meanwhile, all effort to reach the Student Union President proved abortive as he declined all calls put through.

When contacted, Dean, Directorate of Students affairs, Dr Omotosho O.S re-confirmed that there was no increment.

According to him “ there was no increment of school fees at all, particularly for our stalites.

“…for the freshers, management will take a fresh decision on that and we cannot increase school fees without the approval of the Council, the students Union will also be carried along.

Dismissing claims that the school portal was hacked, Omotosho said “ no, the school portal was not hacked, some people erroneously put it on the portal, that was why we ordered that it should be put out, the Rector was aware and that was why he ordered that it should be put out immediately, that decision not yet taken on it, final decision lies with the Council.

The fresh students will come in based on fresh agreement, he said.

Speaking on the alleged plot to proscribe the Union by suspending the Students’ Electoral Commission Chairman, the Dean, Omotosho told WITHIN NIGERIA that the claim is untrue.

Omotosho said “…nobody suspended the ISEC chairman, those spreading such claims should provide a letter of his suspension, it is false.

“The ISEC is independent, the Rector cannot suspend the students’ electoral body.

“Because the examination commence tommorow, Monday, 4th of April, we directed that they will conduct the election immediately after the second semester examination.” he added.

WITHIN NIGERIA had earlier reported that the management of the school suspended the Students’ Union election amid violence which broke out between two different contesting groups.

It said, it was necessary after it reviewed the security challenges on campus and Ede community.

While it assured that the Students’ Union Election will now hold immediately after the second semester examination.

Bauchi: Allegations of blasphemy new excuse by Northern fundamentalists to kill - CAN

Blasphemy: Events that led to Deborah's death will not happen again, Tambuwal vows