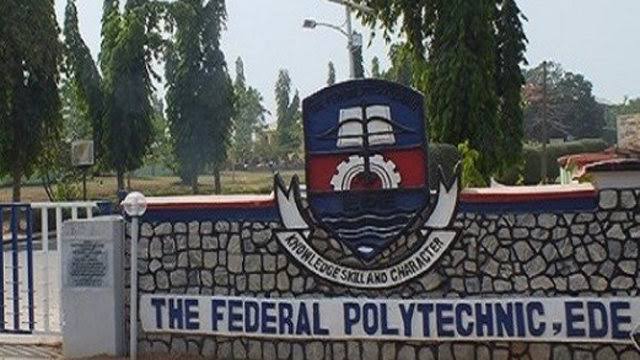 I write to you, Dr Edaogbogun now John Adekolawole as the fifth Rector of the Federal Polytechnic Ede. Like your predecessors, you also will never stay forever in office. As leaves wither away, your time and authority as the head of the prestigious polytechnic will also expire. Only memories either worthy or undeserving that you created while in office will forever remain especially in the minds of your victims. Success is never a must. It is not mandatory that you leave the polytechnic better but do not make things worse or make life unbearable for people whom you have chosen to lead in reverse.

Unlike others, I’m not interested in what made you changed your name from Edaogbogun to Adekolawole in the late 1900s but I am absolutely confident that history can only be pushed aside, it can never be rewritten. I am also not interested in allegations of fraud, arbitrary use of power, nepotism, flagrant disrespect of tradition and formation of a smaller circle to direct the affairs of the polytechnic community in their own terms levelled against your person. In as much the pillars of the polytechnic community have no clear issues with these allegations, it is safe to posit that your end is not yet in sight.

Before I set the ball rolling, I would love to take you through memory lanes. It is in the nature of human to forget events but some people owe it as a duty to bring back memories of such events. Barely three years ago, the polytechnic community went through its difficult and most challenging moment owing to irreconciliable differences between the Rector and leadership of Academic Staff of Union of Polytechnics (ASUP).

In the end of everything, lecturers were paid full salaries and there was no changes in the management body but students were the direct victims of this ridiculous brickbatts. And injustice is still prevailing in the polytechnic community. It was a very ridiculous and annoying adventure. Students were illegitimately denied their exclusive rights to study because people they call elders could not resolve their differences amicably.

While I acknowledge that the show of gratitude should not be a forceful decision but it is disappointing and extremely shocking that the management of the Federal Polytechnic Ede under the leadership of Dr. J.T Adekolawole could announce 100 percent increment of tuition fees across all boards. A friend who was worried about the rude and sharp increment asked if you; Dr. Adekolawole is not a citizen of Nigeria. I smiled.

You are no doubt a citizen of Nigeria but you belong to colony of oppressors and intimidators. The harshness of the economy is no more a story. Sufferings every average Nigeria go through to eat two square meals per day is not new. The economy is harsh and living in Nigeria is now among the 1000 ways to die. It is strange that you decided to make life difficult for students rather than joining the platform of opportuned men who are making differences across Nigeria campus through scholarship, welfare programmes and sponsorship of projects. It is quite unfortunate that as people work on daily basis to make life comfortable for students, you are not only making it difficult but strategically reversing their efforts to make life bearable for all.

As much as I prefer Edaogbogun, I would love to honor your decision to renounce the name and respectfully call you Adekolawole. When you became the Rector, you promised to change the narratives of the polytechnic community by giving chances to fresh ideas and allow entrepreneurship to take its place. You vowed to increase the IGR of the polytechnic and strived to make life easier for all. Today, you have not only taken a step back on your promises but you’ve also added to the pains of average resident of the community. You have chosen the path of terror, tyranny and decided to rejoice over the victory of evil and falsehood. Sir, this celebration will not last.

I have also reliably gathered that you are working with security operatives to intimidate and arrest critics especially those who disagree with you over the increment. I learnt that you have instructed security operatives to harass critics or students whose voices have created disturbances everywhere because you decided to increase tuition fee by 100 percent. As you struggle to make this possible, I really wish to advise that you should build more cells for the police too because it is never in the agenda of the oppressors to discuss the liberation of the oppressed. The more police effect arrest, the more negative voices against your actions you shall witness.

It is worthy to note that you will not be the first Rector to harass or intimidate students. Like other oppressors too, you will not escape the consequences of your actions. I also gathered that you are striving hard to suppress the press. Your boys have been moving around to create fear and tension. They have been passing message of terror, intimidation and harassment. The more you strive to suppress the press, the more the capacity of the press to withstand your suppression. No one has ever conquered the press. If others failed, you will fail too.

Is their hope? Yes, there is. Can you still make things right? Yes you can. Is it possible for the polytechnic community to be peaceful again? Yes it is possible. True peace can only be achieved through peaceful reconciliation. There can not be peace without shifting of grounds. To make peace possible, there must be sacrifices.

I am writing to your office to make two demands. The first demand is to publicly tender an apology to the entire polytechnic community for playing the game of falsehood and subjecting the intelligence of students to ridicule. You decieved the entire students populace. To be trusted again, you must firstly apologise to them. You lied that only freshers will pay new tuition fees but the information on the school official website states otherwise. True reconciliation does not happen without trust. The second demand is to call for an extensive and elaborate meeting between the management, students and interested stakeholders to purposely discuss and review the tuition fees in relation to the new increment as announced on the official website of the school.

I look forward to your immediate actions to make things happen. I end this letter with one of the favourite quotes of late Chief Obafemi Awolowo; if we are related, we shall meet again.

Sodiq Lawal Chocomilo is a concerned FPE stakeholder and writes from Osogbo, the capital of Osun State