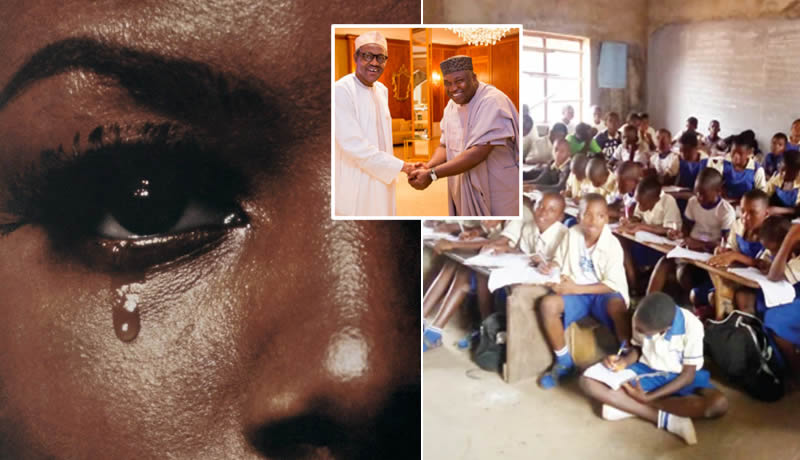 Call it marginalisation, maltreatment, man’s inhumanity to man, you may not be entirely wrong. The plight of government primary school staff in Enugu state is alarming as it is dehumanizing, some staff speak to WITHIN NIGERIA.

Our reporter who went round some primary schools in the state revealed that there is high level of deprivation being meted out to these staff.

At Oriental Primary school, Ugbene-Ajima in Uzo-Uwani local government area, one of the staff who spoke to our reporter under  anonymity for fear of victimization expressed her displeasure over the alleged marginalisation of staff of Enugu State Universal Basic Education Board, ENSUBEB, a body under which primary school staff in the state are.

According to the staff, ” I have put up more than a decade in this job but I cannot feed my family or train my child in higher institution. What kind of job is that? This is very much disappointing and frustrating. ”

Explaining the staff said that, ” The way we are being treated is very much unfair. Our counterpart in secondary schools are being paid minimum wage since February 2020 while we in Primary school are not. Every month, they keep on telling us one cock and bull story about the minimum wage while our counterparts in secondary schools started receiving their own since two years now. This is very dehumanizing, to say the least.”

However, at Premier primary school 1, Aku, Igbo-Etiti local government area, the story is still the same. One of the staff, Mrs. Virginia Uwadiegwu( not real name) told WITHIN NIGERIA that she regretted being a primary school staff.

According to Mrs Uwediegwu, “my sister advised me against applying for ENSUBEB but I didn’t listen. I didn’t want to stay idle then. Four years after I got this job, my sister also got her employment with secondary school board. If I tell you that her salary is far higher than my own, you will not believe. There is no minimum wage, no thirteenth month salary and leave allowance for us in ENSUBEB while our counterparts in secondary schools are being paid all these entitlements. What have we done to deserve this ill treatment  we cannot be told.”

Narrating further, Mrs Uwadiegwu stressed that ” you know as much as I do that the state government has been spending millions of naira on infrastructural development like provision of state of the art buildings, seats,tables and other infrastructure for primary schools in the state. But the annoying thing is that the state government does not think about the staff working in these schools. We are not motivated and this is not good at all.”

Nevertheless, at Model primary school Nsukka, a popular school in the metropolis, one of the teachers, Mrs. Rose Uwazuluike(not real names) who spoke to our reporter stated that working in government primary school in Enugu state is as good as working in private school.

According to Uwazulike, ” imagine as I speak with you now, I have less than five years to retire and I am very much afraid. Why? This is because I am neither expecting gratuity nor pension two years after my retirement.”

Speaking further she explained that ” if you speak to our retired colleagues they will tell you that there is nothing like gratuity in Enugu state primary school system, while our pension starts two years after retirement, that is if one does not have any official issue. We don’t have anything called minimum wage while we receive monthly salary in the middle of the succeeding month. Our counterparts in secondary schools don’t encounter any of these problems. They receive their salary on or before 27th of the same month, they are paid the new minimum wage of N30,000 while they also receive their pension one month after their retirement.”

Explaining further her disappointment, she explained that ” the most annoying thing is that we in primary do more work than our counterparts in secondary school. We teach all the subjects, we stay with these pupils in their class rooms, we write fifteen lesson notes every week yet we are being marginalised.”

” I retired in December 2019. It was only three months ago that I received my first pension. I served this state thirty five years, retiring as a head teacher and as you can see, I don’t have a befitting house because of poor remuneration and condition of service we see in ENSUBEB.”

According to Mr. Nwodo, ” I have vowed that none of my children and grand children will be a primary school staff and I thank God none of them attended College of Education.”

Recall that the Organised Labour in Enugu state, which include the Nigeria Labour Congress, (NLC); Trade Union Congress (TUC); Nigeria Union of Teachers (NUT); and the Nigeria Union of Local Government Employees (NULGE), Wednesday, January 19, 2022 embarked on a three-day warning strike over the N30, 000 minimum wage.

According to the Union, the three-day warning strike was to force the local government councils in the state to start paying their workers the new national minimum wage.

It was also to ensure that the primary school teachers start receiving their own minimum wage like their counterparts in secondary schools and core civil servants who had started receiving the enhanced wage since last year.

Chairman of TUC, Comrade Bennett Asogwa, said they held a meeting sometime ago and decided to embark on the solidarity strike to help their NULGE counterpart.

He said they knew that NULGE alone might not be able to force the authorities to pay the minimum wage since they had been fighting to no avail.

“Yes, we embarked on a solidarity strike for the local government workers and the primary school teachers.  They ought to be paid the minimum wage.  They don’t have a separate market,” he said.

The NULGE President, Comrade Kenneth Ugwueze, who also confirmed the strike said they embarked on the warning strike to press home the demand for minimum wage for local government staff and primary school teachers.

Nevertheless, few days after the warning strike, the state government dragged the Union to the National Industrial Court of Nigeria sitting in Enugu seeking an injunction to stop primary school teachers from embarking on strike.

During hearing on the matter with case No: NICN/EN/01/2022 the Counsel to the state government, Barr. Joseph Omeh in his argument asked the court to stop the three days warning strikes because they are essential workers.

However the following Friday, the court ordered primary school teachers in the state to suspend their planned strike action pending the hearing of a substantial case filed by the state government.

The presiding judge, Oluwakayode Arowosegbe said that teachers are essential service workers and would not be allowed to embark on strike according to labour laws, stressing that the strike would sabotage the economy of the state and the country.

He, however, warned the state government to stop threatening the teachers and enjoined both parties to maintain the status quo until the substantial case is heard.

By and large, on March 8, the Court dismissed the suit filed by the Enugu State Government seeking to stop primary school teachers from embarking on strike over the non-payment of the national minimum wage.

The court presided over by Justice Oluwakayode Arowosegbe of Court II, had in an interlocutory injunction restrained the teachers from embarking on any form of industrial action pending the determination of the substantive suit and ordered an accelerated hearing.

Delivering its judgement on the suit, Justice Arowosegbe, dismissed the suit and ordered Government of Enugu State to go back and negotiate with the teachers, describing it as discriminatory for the Claimant to pay some workers in the state employee minimum wage, and refuse to pay the teachers same. The Judge noted that the state could not stop the teachers from ventilating their grievances through industrial action.

The court, in its judgement Tuesday, March 8, 2022 held that the Primary School teachers in Enugu State do not fall within the categories of workers who provide essential services, hence they can embark on strike and other lawful means to press home their demand.

“The court found as condemnable the attitude of the Claimant/plaintiff for its failure to implement the national Minimum wage as approved by the federal government since 2020. Such (an) act of the claimant is discriminatory.

“The claimant is hereby ordered to go back to negotiating table with the Defendant and implement the national minimum wage. The defendants are entitled to be paid the Minimum wage.”

He however described the attitude of the government as callous and discriminatory for disregarding the important role and services the teachers render to society.

Meanwhile, the immediate past chairman of Enugu East local government area, Prince Alex Ugwu said the council chairmen lacked the financial muscle to pay the minimum wage. He said that it won’t be nice to start paying to stop afterwards.

Ugwu said that in spite of the financial autonomy the councils are now enjoying, they cannot pay the minimum wage.

“It is not as if the chairmen do not want to pay the minimum wage.  We don’t have the fund to do so.  Will it be nice we start paying the minimum wage and later stop or start owing,” he queried.

However, when our reporter contacted him on phone, he couldn’t pick up.

More so, all efforts to get the reaction of the state commissioner of Education, Dr. Uchenna Eze  on phone proved abortive as his phone is said to be always busy.