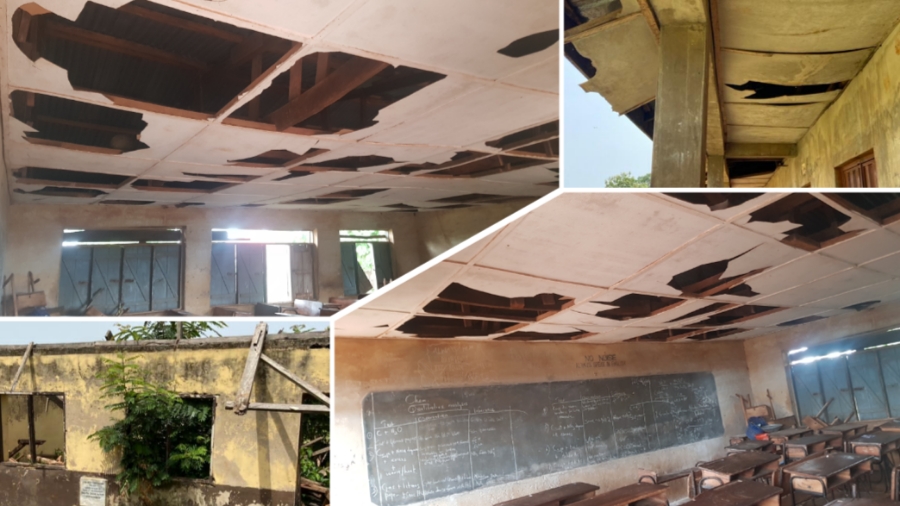 The school is located at Ilaje Curtis, Oja Aba along Muroko road in Ilesa. It is directly opposite Holy Trinity Primary School which is few metres away from an outlet owned by Federal Fire Service. There are shops, kiosks and outlets attached to the school fence where goods can be bought.

On a Saturday evening, WITHIN NIGERIA reporter visited Ogedengbe School of Science, Oja Aba along Muroko Road. When this reporter alighted from commercial bike, more than three signposts erected by different graduating sets of the school were sighted which made it easier for him to locate the school.

As this reporter walked to the gate, he observed that the vicinity of the school was neat and the first two buildings he sighted were structurally fine and painted. Elders that advise not to judge a book by its cover were not wrong. This reporter toured the entire school and was shocked and terrified by what he found on the ground.

The school has only four buildings that are in good condition while others are either in ruins or with broken ceilings. There are also abandoned buildings in the school’s vicinity. These four buildings are; Principal’s office, the examination hall, the laboratory and public toilet. Out of these four buildings, two were donated to the school by HUAWEI Nigeria as a corporate social responsibility.

A check by WITHIN NIGERIA revealed that the former governor of Osun State and current Nigeria’s minister of Interior, Rauf Aregbesola on February 28, 2020 commissioned some projects donated by HUAWEI Nigeria.

The projects include the provision of Borehole; Stanchion; two 250Ltrs storage tanks; a 5KVA generator to guarantee constancy of power for unhindered water supplies; toilet for staff and students with modern facilities; stools and modern laboratory tables complete with gas, water and electrical supplies to each student’s experimentation point; demonstration platforms and white screen teaching boards for the instructor; basic chemical apparatuses; one laptop and one desktop computer with printer, AVR, UPS and accessories were also provided.

Aside the projects donated by HUAWAEI Nigeria and the renovated principal’s office, the school is characterised with broken ceilings, broken windows, abandoned and collapsed buildings. There is no classroom without broken ceiling.

This reporter entered some classrooms that are not underlock and observed that these classrooms have no windows and one wonders how students survive during rainy season. These classrooms are characterised with broken floors.

Another old student whose children attend the school identified as Deborah Akinpelu told WITHIN NIGERIA that there is still need for more facilities within the school premises despite the contribution of HUAWEI Nigeria, a technological giant firm and charged concerned bodies such as old students association, government and others to contribute to the growth of the school.

Deborah who graduated in 1997/1998 academic session confirmed that some old students at a time embarked on a mission to contribute money for projects to be done in the school but it was not successful. She also implored industries and big firms to follow the footsteps of HUAWEI Nigeria and make the school, Ogedengbe School of Science a cynosure of all eyes.

A 17-year-old boy simply identified as Peter who followed some young boys to play football on Saturday evening told this reporter that he is a student of the school.

According to Peter, students do not use abandoned buildings but they use classrooms with broken floors and ceilings. He added that students need more facilities such as toilets, laboratory and an equipped school library.