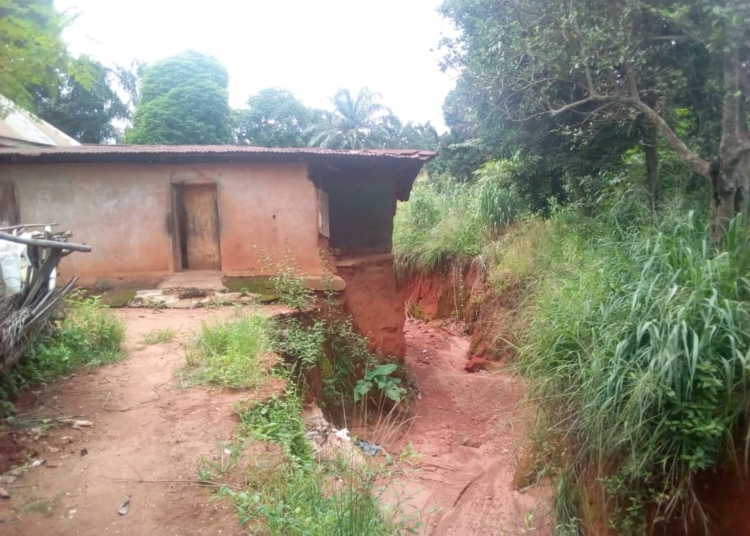 One of the affected area

Many residents of Uwal Ugwu, Echara community in Nsukka local government area of Enugu state have continued to count their losses as flood menace continue to wreak untold havoc in the community.

The incident which has left many of the dwellers homeless seemed to have  eluded many solutions as flood continued to wreak ecological disaster in the community.

For the people of the community  rainy season is always characterised by anguish, pains, destruction of life and property.

Since 2016, the community has been on the receiving end of flood disaster in the university town, caused by construction error during the reconstruction of Obechara/ Ikenga junction and Barracks junction roads in the area.

When our reporter visited the community to assess the level  of destruction, only anguish, pain and palpable fear could best describe the condition of the community dwellers as some building have been washed off by the flood.

One of the community dwellers and a  casualty of the disaster, Mr. Anthony Ezema told Within Nigeria that, “we have been like sheep without shepherd. We don’t know where to run to. My six room apartment was completely destroyed by this flood in 2019. As I am talking to you now, we are living in palpable fear. This last night rain reminded us of the anguish and pain we are going to suffer this year. As you can see, my second building is not even safe. If nothing is done urgently to curtail or stop this flood menace, I will be rendered homeless this year.”

Appealing to the government, Chief Ezema, a member of Igwe’s cabinet in the community appealed to the state government to come to their aid before flood makes them homeless.

Another community dweller, Mr. Livinus Ezugwu equally told our reporter that life has become unbearable for him and his family after his four room apartment was completely destroyed by flood in October last year.

” Since October last year, we have been passing through unbearable condition as a result of the collapse of my four room apartment”, he said.

Explaining his ordeal, Mr. Ezugwu told  our reporter that he has been rendered homeless by the flood.

He said: “We were sleeping last week when suddenly there was a big bang. When I came out to know what was happening, half of my building has collapsed, falling on big gutter created by flood in my compound. There was heavy rain that fateful night and so, we were running helter skelter to save my little children.

”After this ugly incident, I started soliciting for the help of good spirited individuals who helped put up this make shift apartment with water proof. We are now living like refugees in our own compound. I don’t know where to go tomorrow if this rain falls again. I appeal to the state governor, Ifeanyi Ugwuanyi to come to our aid and correct this construction error before this flood destroys all of us here.

Another affected person, Mrs. Theresa Chiboke told told our reporter that she was in total dismay as a result of the disaster.

“The incident happened around 1am. I was sleeping when one of my tenants woke me up, shouting that our house had been submerged by flood water. When I woke up, I saw that all our property had been destroyed by flood water. We started shouting for help and some neighbours came to our rescue.”

Mrs. Chiboke, a widow, further explained: “We are currently living in fear. Every day, as cloud darkens for rain, we become afraid because we don’t know the extent to which the next damage may occur. We appeal to the State government to come to our aid by re-channeling this flood water to another safe place.”

Nevertheless, in a chat with our reporter the chairman, Uwani-Ugwu/Agbani flood control committee, Chief Jonas Ojobo stressed that ” we are living in fear here. Our people in this community are not happy that up till today, the state government has not fulfilled its promise of channelling this flood to another safe area. We have been suffering from this situation since 2016 after the construction of major roads in this town; during which flood water was wrongly channelled to this community. Governor Ifeanyi Ugwuanyi visited this community in August 2016 when the flood destroyed so many houses. He promised to channel the flood to another area, but up till now, nothing has happened, leading to destruction of property by this flood every year.”

Chief Ojobo also appealed to the state government to come to the aid of the community before it becomes too late.

Investigation by Within Nigeria revealed that in 2016 when Ugwuanyi commenced massive construction and reconstruction of some major roads in the Nsukka metropolis, this was greeted with a lot of praises and commendation by many who were convinced that a Daniel had finally come to judgment, to right the wrongs that alleged age-long marginalization of the zone by the previous administrations in the State had done to the zone.
Thus, the reconstruction of Opi/Nsukka dual carriage way, UNN Road, Obechara/ Ikenga Road and Ogurugru was seen as huge infrastructural achievements in the zone.

However, less than one year after achieving such infrastructural feats, constructional defects of the civil engineering works done on the roads started manifesting. One of such defects was improper channelling of the flood waters coming from the roads.

At Obechara/ Ikenga Road, for instance, the flood water was channelled to an Uwani-Ugwu village in Umuakashi community, leading to constant destruction of property in the village.

However, in a recent release by the Enugu State Emergency Management Agency, ENSEMA, the agency said they are working assiduously to table address the problem.

The release which was signed by the Executive Secretary of the agency Mrs. Nkechi Eneh the organization expressed concern on the issue while promising to expedite action, soon.