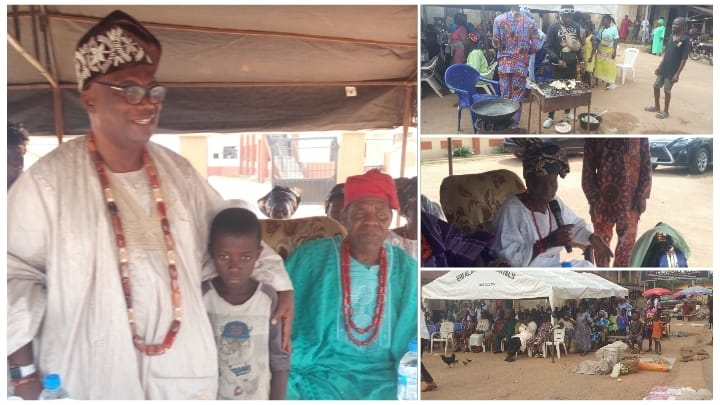 Traditions must be preserved. The early practice of our forefathers must not be neglected. We must consciously allow the free flow of customs and traditions from generation to generation. As we strive to rejig the early practice of our forefathers to meet up the requirements of today, we must not allow modernity or civilisation to redefine its purposes.

Despite little or no reference to traditions in certain quarters owing to perceived influence, some ancient towns are still in love with the early practice of their forefathers, jealously protecting its heritage and image.

WITHIN NIGERIA visited Iloko-Ijesa, one of the ancient towns in Oriade Local Government, Osun State, Nigeria and joined hundreds of natives to celebrate its ‘New Yam Festival’. It was indeed a fascinating and heart-warming event.

This reporter left Osogbo, the capital of Osun State around 11:30am and took a commercial bus to Ilesha, former administrative headquarter of Ijesaland. From Ilesha, he took a bike to Ijebu-Ijesa which is barely 20minutes journey.

From Ijebu-Ijesa, this reporter took another bike to Iloko-Ijesa where he saw the popular Olashore International School, its mini-stadium, hotel among others. Iloko-Ijesa is blessed with good road network.

This reporter alighted at a small garage which is directly opposite the Roundabout. The Palace of his Royal Majesty, the Owaloko of Iloko-Ijesa, Oba Akeem Olusayo Ogungbangbe is located few metres away from the roundabout.

At the front of the Palace’s gate, there were women and men believed to be guests waiting for the commencement of the festival while others were seated at the tents directly opposite the palace, listening to good music coming from available sound systems.

When this reporter entered one of the big halls in the palace where guests normally sit, he saw the monarch well seated on his throne with his regalia depicting royalty with a touch of simplicity. He was engaging some officials of National Commission for Museums and Monuments (NCMM), Osogbo about the essence of the New Year Festival.

WITHIN NIGERIA sighted one of the chiefs in Iloko-Ijesa who is not only the ‘head of youths’ but also in charge of the occasion. Chief Odeyemi Lawrence Kehinde, the Logan of Iloko-Ijesa explained the rudiment of the festival.

Chief Odeyemi explained that a prominent chief with the title of ‘Aworo – Spiritual head’ would firstly eat at Obalogun’s house (The residence of a warrior who rescued the town from invaders or external enemies) which means both natives and residents living in the town can now eat new yams.

The chief in his fifties also stated that Aworo would celebrate his own New Year festival in the second week of July.

‘Following the celebration, he would declared that new yams should be allowed in the markets but people are not free to eat yams until the end of the festival, he added.

Logan further cleared that he must firstly inform the monarch about the instruction given by the Aworo and a date will be picked for the ‘New Year Festival’ which must also fall under ‘Ojo Arayo – a very important day in the history of the town’.

Chief Odeyemi maintained that the Logan (head of youths) alongside the monarch would eat any variety made from new yams grown and harvested by youths of the town before it can be declared open for the public. People can only eat ‘Egbe Isu – dry yams) but can not eat new yams until the end of the festival, he added.

This reporter moved around the ancient town and observed that there was no goat roaming aimlessly in the town. A resident of the town simply identified as Seun told WITHIN NIGERIA that owing to reports of goats eating up farm produce and disturbing elderly people, the monarch directed that all goats should be reared in a place where they can be monitored properly.

A woman in her eighties who was later identified as the Iyaloja of Iloko-Ijesa while addressing the people said this year’s festival is a clear departure from decades’ norms.

‘The festival has always been a low-key. Few people would just gather at the Logan’s house, eat different meals (varieties of yam) and go back to their respective houses. In fact, most people do not know about the festival but this year is different and I thank our Kabiyesi for his support and love for the community’, a rather happy aged woman said.

‘When I saw tents and people sitting under it, I thought the palace is probably having a programme. Until I moved closer and people started greeting themselves ‘Aku Odun Isu o’, she said.

The event was interesting and entertaining too. The master of ceremony, Mr Akinola tested the knowledge of students on basic things to know about the town and they won different gifts too. But there was a particular child whose native intelligence was exceptional.

This small boy who was not flamboyantly dressed calmly recited the anthem of the town and warmed the hearts of many. He received gifts and monetary rewards from many. He also received monetary gift from the monarch, Oba Dr. Akeem Ogungbangbe. The proud and happy royal father asked his photographers to capture the moment.

The Owaloko of Iloko-Ijesa, Oba Dr. Akeem Olusayo Ogungbangbe while addressing hundreds of natives at the gathering appreciated their presence and also tested their knowledge through cultural questions.

The happy monarch also asked the people to be extra-vigilant and appealed to youths to take cognisance of happenings in the town especially the activities of invaders who disguise as waste carriers.

In a chitchat with WITHIN NIGERIA, his Royal Majesty, the Owaloko of Iloko-Ijesa said he is glad that he has returned the festival back to its initial roots after 52 years ago.

When I was a child, I watched our fathers celebrating the New Yam festival at the Aragba square. They would bring together harvested yams from our farms to the market and dine with our mothers, wives and children at the square. That was why I instructed that this year’s festival must be celebrated at Aragba’s square, he added. 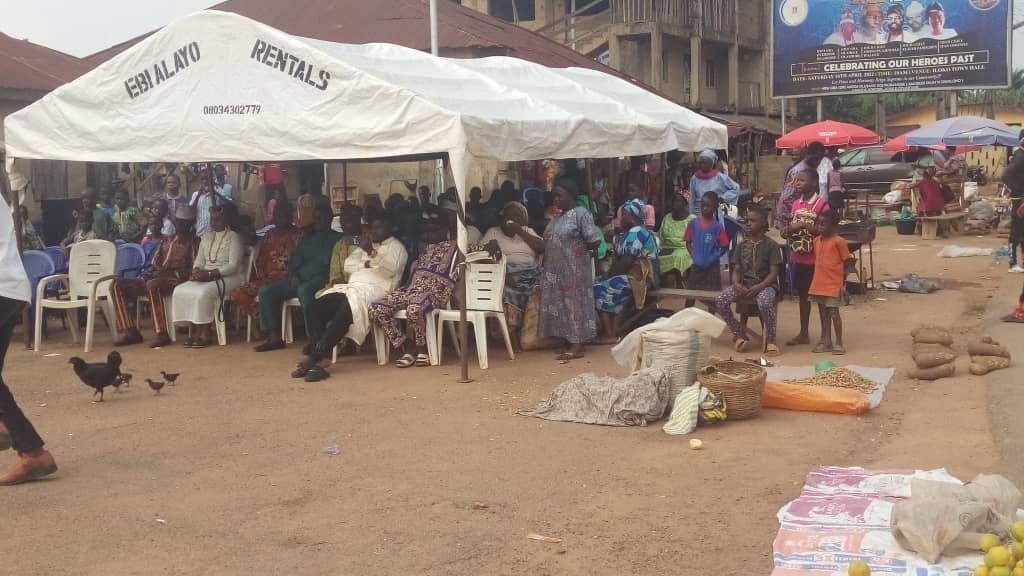 The monarch who was crowned a year ago revealed that when he was a child, the Aragba Square was the main location for celebration but he observed that they have changed everything as a result of little or no support.

‘I am ready to give it a face-lift. By God’s grace, next year celebration will be massive and loud. We will invite a lot of people, seek supports where necessary and make it a worthy cause. We are not done yet’, the monarch added.

When asked about the essence of the festival, the monarch said it is a celebration of hard work, diligence, determination and unity.

Oba Ogungbangbe further stated that the festival is a compensation of efforts.

‘When our forefathers go to farms to cultivate and work for several months to feed their families, they gather once in every year to celebrate their efforts and eat the harvests of their hard work, he added.

The monarch while thanking the youths of the community for their supports added that this would be the first time after many years we will be celebrating the New Year Festival with yam produce from our soil through the efforts of our sons.

WITHIN NIGERIA also walked towards traders who displayed their wares for sale. This reporter patronised them to compare the price of foodstuffs and observed that the prices of yam, maize and others were relatively low.

The celebration continued after the king’s speech. There was abundance of foods to eat. People in their hundreds were seen eating pounded yam, Egunsi soup and meats. Small boys could be seen dancing to the melodious songs being played by the DJ.

While natives and residents of Iloko-Ijesa enjoyed their meals, the monarch headed back to his palace to attend to guests. The look on his face appeared satisfactory with the outcome of the festival but all what I saw was a king who still wants more.

This year’s New Yam festival has come and gone. As we anticipate the surprises Owaloko of Iloko-Ijesa, Oba Dr. Akeem Olusayo Ogungbangbe come next year August, WITHIN NIGERIA in conjunction with Iloko-Ijesa people ask other Nigerians to engage in either subsistence or commercial farming. Food security is our collective responsibility. We must cultivate now to harvest later.