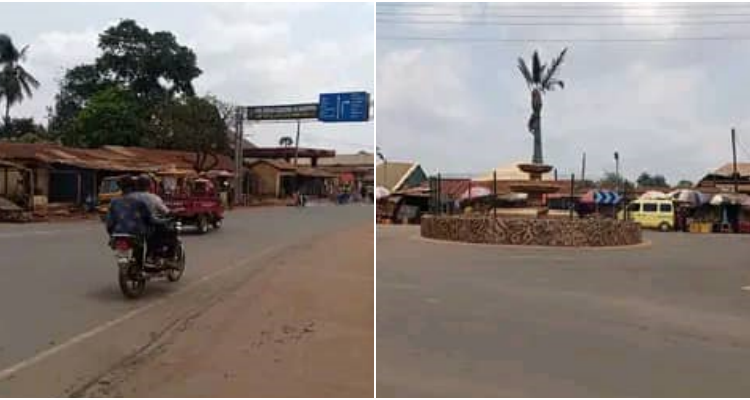 For the people of Igbo-Eze North  local government area of Enugu state, life is gradually becoming unbearable following dusk to dawn curfew imposed on the council area by the state government on June 10, 2022. The curfew was coming on the heels of continuous clash between the Fulani herdsmen and the Aguibeji community.

Our reporter gathered that as the clash continued, the Indeginous People of Biafra IPOB members in the area started hoisting Biafran flags at so many strategic places in the area, thereby escalating the crisis in the area.

Also recall that gunmen had stormed the mechanic workshop of a popular transport mogul in the area, Chief Matthew Adonu, killed two of his police escorts and made away with their service rifles.

As if that was not enough, the gunmen also raided the home of the member representing Igbo-Eze North/Udenu Federal Constituency,  Hon. Simon Atigwe. They shot their way into the compound and shattered the tyres of exotic vehicles parked in the premises before storming the home of the traditional ruler of Aji Essodo community, Igwe Simeon Itodo, where they also fired gunshots in the air before leaving the scene.

Following a security report, the Federal Government drafted soldiers into the area, while the state government imposed a dusk-to-dawn curfew in Igbo-Eze North and Igbo-Eze South local government areas. But the purveyors of violence remained undaunted as they stormed the office of the Independent National Electoral Commission (INEC) in the council area at midnight and burnt the entire facility.

However, with the imposition of dusk to dawn curfew and subsequent deployment of hundreds of military personnel to ensure the strict compliance of the order, our reporter gathered that the socio-economic situation of the area has changed.

When Within Nigeria visited Ogrute, the headquarters of the council area, there was palpable fear and trepidation among the community dwellers. Our reporter also gathered that many businesses have literally collapsed due to the prolonged curfew. One of the shop owners Chijioke Abugu who spoke to Within Nigeria lamented the high level of economic hardship the prolonged curfew has brought to his family.

According to Mr. Abugu, ” the situation is really unbearable. As you can see, I sell  drinks here. My business strives in the evening say from 6:30pm but with this curfew, nobody comes out again  in the evening to take drinks because of this curfew. Before 6pm, we have already started running helter skelter to close for the day.”

Lamenting further, Mr. Abugu explained that ” before this curfew was imposed on our council area, I was making ten thousand naira every day as profit. As you can see I sell palm wine, beer, soft drinks and even pepper soup. But today, I hardly make two thousand, five hundred naira in a day. You can just imagine the level of hardship we are currently experiencing as a result of this curfew. Beyond all these, my own case is even worse because I borrowed five hundred thousand naira from a Microfinance bank here. One week after I borrowed this money, this curfew was imposed on our council area. Since then, the bank has been disturbing me to repay the loan while I can hardly make anything from my business now. I am appealing to the government to lift this curfew so that we can go back to our normal life.”

Another business man, Mr. Clement Eya also told our reporter that he has not been finding it funny since the beginning of the curfew. ” I am a patent medicine dealer. My business is mainly done from 5pm to 11pm. But as it stands now, I have only one hour or so to do the business because of this curfew. Before quarter to six in the evening, we are already closing our shops. If you waste time and these soldiers see you in your shop, you are on your own and I am sure you know what I mean by that. Please, I want you people to talk to the governor of Enugu state, Rt. Hon. Ifeanyi Ugwuanyi to look at our plight and suspend this curfew because we are not finding it funny any longer.”

Perhaps the case of Mr. John Nwodo (not real names) seemed to be more pathetic. According to him, military personnel deployed to council area are causing more harm than good.

In his explanation, these soldiers are no longer doing what they were sent to do. Rather, they have turned the curfew to money-making apparatus.

“On Tuesday last week, I was called that my mother was critically sick. As I was rushing home to take her to the hospital, these soldiers came out from their hiding inside bush and asked me to stop which I obeyed. They beat me mercilessly without even asking why I was rushing with my bike that evening. They took me and my bike to the local government secretariate at Ogrute. After about one hour, they told me to pay fifteen thousand naira; five thousand naira for me and ten thousand naira for my motorbike. I left them and started trekking from there to Umuagama village. When I got home, my mother has died. ”

Narrating further he said, ” two days later, I went back to retrieve my motorbike and they told me that I must pay N15,000; N5,000 for me and N10,000 for my motorbike. I paid the sum of fifteen thousand naira for my motorbike to be released at Ogrute, headquarters of our local government. As I am talking to you, every day, more than twenty motorbikes are being forcefully seized by these military men just for the purpose of collecting money from their owners.”

in the midst of the confusion, alleged brutality and extortion meted out on these residents, Governor Ifeanyi Ugwuanyi visited the scene recently, where he inspected and assessed the level of damage and also interacted with residents, urging them to support the security agents and the government in making their communities safe and conducive for living.

Chairman of Igbo-Eze North LGA, Itodo, who spoke after the governor’s visit, appealed to youths in the area to shun violence and  urging them not to resort to arson and destruction but, instead, embrace peace and civility for the overall development and progress of the people.

The chairman said the descent to anarchy and destruction of public property would do one no good as the people would be the ultimate losers at the end of the day if public institutions and private establishments are destroyed.

While condemning the actions of the arsonists, Itodo noted that the Ugwuanyi administration had initiated meaningful engagements with the youths, which his administration at the local level in Igbo-Eze North had emulated by trying to carry the youths along in executing government policies and maintaining an open-door administration, where the people could access to their leaders and also get feedback from government.

However, the last straw that broke the carmels happened on Sunday, August 7, 2022 when a 62-year-old electrician, Joseph Uja, was  killed by soldiers enforcing a curfew imposed on two local government areas in Enugu State.

The incident happened at Enugu-Ezike in the Igbo-Eze North LGA, one of the councils affected by the 6pm to 6am curfew while the second council is Igbo-Eze South.

The killing was said to have sparked tension around Enugu-Ezike town of Ogurute, as people feared a reprisal from community youths.

According to reports, a resident, who asked not to be identified for security reasons, said on Sunday that the soldiers mistakenly shot the victim while he passed their checkpoint.

Uja was reportedly returning from Nsukka, where he went to buy electrical materials for his customers when the incident happened.

According to the resident, “Joseph Uja was killed by soldiers who were trying to deflate somebody’s tyres yesterday. Uja was from Igogoro, Enugu Ezike, Igboeze North LGA.”