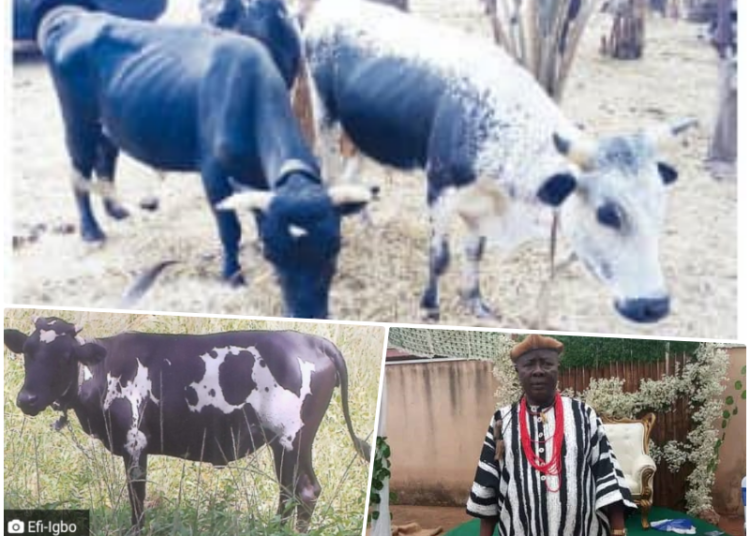 For close to two decades now, there has been growing concern over the increasing decline in the number of Igbo cow, popularly known as efi Igbo.  There  has been also concern over the seemingly near extinction of some ancient domestic animals like duck and pussy cat. These  domestic animals WITHIN NIGERIA reports showed  would appear to be gradually but inexorably going into extinction.

By and large, every year, the population of the usually cherished domestic animal, Efi Igbo regrettably takes a nose-dive to the extent that it is almost becoming difficult to get it in a large number anywhere in Igboland.

Where it exists at all in large numbers, as in Umundu, Udenu local government area of Enugu State where Uchenna Uroko has a large ranch of Efi-Igbo, much of what he has is cross-bred, meaning that it is no longer pure Efi-Igbo.

Igbo cow, our research revealed is of the bull stock. The male ones are especially strong and troublesome and often have to be properly leashed to prevent them from escaping and goring people. Unlike cattle, the ‘domesticated bovine farm animals that are raised for their meat, milk, or hides or for draft purposes,” Efi-Igbo, though meaty and nutritious too, is largely a ‘spiritual’ animal, used mostly for burials in Igboland.

Reasons for the  scarcity of Efi-Igbo

WITHIN NIGERIA investigation revealed that but for the fact that the specie of cow is used for funeral and other traditional ceremonies in most parts of Igbo land, it would have completely gone extinct. This, analysts say, perhaps accounts for its current prohibitive cost in the market.

However, when our reporter visited a popular cow market in Orba, Udenu Local Government Area of Enugu State, a cow seller, Joseph Ugwuoke, lamented that many people are no longer in the business of rearing the animal because, according to him, it takes a long time to mature and bear calves.

“Since our people embraced formal education, you can hardly see anybody who goes into the business of rearing this animal. Secondly, it is not everywhere that this animal can survive. It is not every grass that it can eat and if you don’t have that kind of grass in a particular area, it will not survive,” Ugwuoke explained.

The  renowned cow seller equally added that, “Beyond this, the animal is so costly. A sizeable Igbo cow costs as much as N250,000 unlike the Fulani cow which you can get for N150,000.”

Another seller, Mr. Titus Oga said: “Apart from the fact that it carries pregnancy for nine months, it bears only one calf. No cow bears more than one calf and it may take more than two years before it gives birth again. In the process of giving birth, it may bear male child which of course you know cannot give birth. More so, Igbo native cow doesn’t have rapid growth like other species of cow, including the one we call crossbreed.”

On the myths surrounding the Igbo native cow, Oga said: “On so many occasions, we have witnessed cases where some people who have not killed cow for their late parents but went ahead to donate cow for their in-laws or friends lost their lives in a short while, after brief illness. It is very practical and a reality in Igbo land. If you dare doubt it, you risk the consequence which is usually death.

“Again, if you have not killed cow for your late parents, you are prohibited from eating the Efi Igbo meat brought from a funeral or even taking one around by the rope tied around its neck. It is an ancient tradition that has refused to die.

“But of course, you know that if not for the use of this native cow for funeral and rituals in Igbo land, it would have gone into extinction. Our people don’t see it as a business venture unlike northerners who would have up to 300 cows in their farms.”

In any case, according to a senior lecturer in the Department of History and International Studies, University of Nigeria, Nsukka (UNN), Christian Opata, the native cow occupies a very strategic position in Igbo tradition and cultural practice

“There is this belief that after man, cow comes next in the hierarchy of the domestic animals. And if you look closely, you will find that most Igbo societies have the notion because once the issue of killing of human beings and using of human beings for sacrifice or rituals ceased, the highest animal that is used now is cow,” he said.

“Some people use other big animals like horse but the use of cow is always higher in number when compared with other animals. This you can confirm if you visit some ancient shrines or even museums. In some of the shrines, you will see a higher number of cow heads that have been used as against other animals.

“Native cows are used to appease the gods and make some cleansing in Igbo tradition. For example, assuming a deity appropriated a particular family and the family wanted to get themselves free. In the past, what was obtainable was that the family would give out one of their own to appease the deity, but these days the practice has changed. What is being done is that the family will bring a native cow instead of human being.

“In this case, in most societies, when this particular culture was evolving, the early people in this area used this cow and made it as a law that until this type of cow was used, the ontological forces there had not been appeased and the deity would not listen.”

Traditional ruler speaks on the myths

The traditional ruler of Owerre Nsukka autonomous community in Nsukka Local Government, Igwe Emeka Ugwu, explained that Efi Igbo was like human being when it came to sacrifice:

According to the traditional ruler,“in the olden days, human blood was used to appease gods of the land. But today, such practice has been abolished and replaced with blood of Igbo cow.  Cow and human beings share some similarities. First, they carry pregnancy for a period of nine months. Second, they don’t have hunch back.

“You cannot donate cow for the funeral of another person while your late parents or parent as the case may be is yet to be welcomed by the people in the spirit world. You have to first of all kill a cow in their name or names before you can take or donate a cow to another person. That is the practice. It kills people here in our community and even in every Igbo land.”

WITHIN NIGERIA  further investigation revealed that despite all the preaching by different Christian denominations against this practice in Igbo land, the tradition has persisted.

At one time or the other, some of the Christian denominations banned their members from using Efi-Igbo for funeral. The ban notwithstanding, many of them go through the back door to use the cow for the funeral of their parents or loved ones, in a bid to save themselves from the unknown or for fear of any possible repercussion.

At the moment, the use of Efi Igbo for funeral and other traditional rituals in Igbo land has become a surviving grace for this specie of cow.

But how far this practice can go in saving the Igbo native cow from going into extinction is everybody’s concern especially as the bitter attacks on the practice by so many Christian denominations, particularly, the new generation churches, continue to grow in leaps and bounds. More so when many Igbo people are not favorably disposed to rearing this ancient domestic animal.