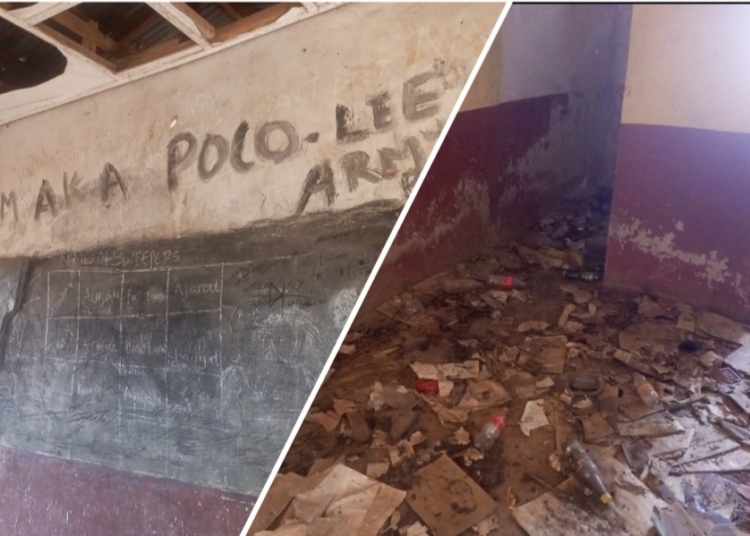 As he got off the motorcycle with this reporter and pointed to a cluster of buildings that were clearly in disrepair, a 17-year-old boy who only went by the name Tunde said, “That’s the entrance to the school.”

To avoid being recognized by onlookers, the native of the Offa community who offered to drive this reporter to the elementary school didn’t stay around for very long.

He took this reporter to school and then he left. Two gates—one for foot traffic and the other for vehicles—were present at the entry when this reporter was touring it.

This reporter also noticed that the fence did not completely enclose the land owned by the school in addition to the fence wall collapsing. There was no signpost to identify the school. The environment was dirty, bushy and ugly. It was a total eyesore.

This reporter preferred not to evaluate a book just based on its cover. He walked into the school with expectations that the main buildings would be relatively better but he was wrong.

The writings on the chalkboards led this reporter to believe that he was at a school when he visited the campus to inspect the main buildings. It should have been referred to as an abandoned poultry house.

When the reporter entered the complex of buildings, he was shocked by what he met on his way. Every five meters, there were rubbish piles. These amassed wastes also gave out a very foul smell. This reporter covered his nose and questioned why young children are permitted to learn in such filthy settings.

This reporter also discovered that the school’s landmass could be divided into two halves, each of which housed a different school. The higher section is where Iyeru Grammar School is located, while the lower part is where Itafa Baptist School is located.

Fresh writings, including “roaster for sweepers” and other phrases, were on several blackboards when this reporter visited, and there were few broken seats and tables, both of which indicated that some of the structures were still in use.

A certain location contains two locked structures that are still in use and one building that is almost completely destroyed. Some classrooms lack windows and doors, while others have ceilings that are shattered.

Along with shattered flooring, some window frames are missing, and some structures have leaking roofs. This reporter was shocked to see several of the school’s classrooms in such terrible condition as they were being moved about the abandoned buildings.

The broken chairs, used papers, and nylons were all visible when this reporter peered into these deserted facilities. These abandoned structures have likely been used as dumps by students. Some students also see these abandoned buildings as hideouts.

These abandoned structures have been there for a very long time, according to Rasak Abdulmalik, a 27-year-old resident of the Offa village who has a child enrolled in Itafa Baptist School, and no one is fixing it for us.

The young father expressed his displeasure by stating that his 6-year-old son attends the school and that every time he visits, he is always astounded by the state of the infrastructure.

Rasak, who criticizes the government’s lack of interest, emphasized that repairing these structures shouldn’t cost more than $20 million, but I have no idea why the government isn’t motivated to fix this institution.

According to Mukhtar, a different resident, two of his children graduated from Itafa Baptist School and are currently enrolled in Iyeru grammar school.
While stating that it is the responsibility of these concerned authorities to complain directly to the government, the NUT chairman also stated that the school administration can report the issue to SUBEB or another agency for prompt resolution.
I want to urge the media not to engage the union in the fight over infrastructure since our duty is to look out for the welfare of our members, not to comment on it. He continued, “We don’t speak to the press on matters of this type.”
When asked if restoring the deteriorating infrastructure in schools will improve teachers’ welfare, Oyewo responded that the boards in charge of the face-lift are our partners in this effort.
They are aware, and there are many schools that need fixing, in my opinion. They are working in groups. They are familiar with the various school’s infrastructure. They’ll arrive in Itafa very soon. I think they are aware, he said.