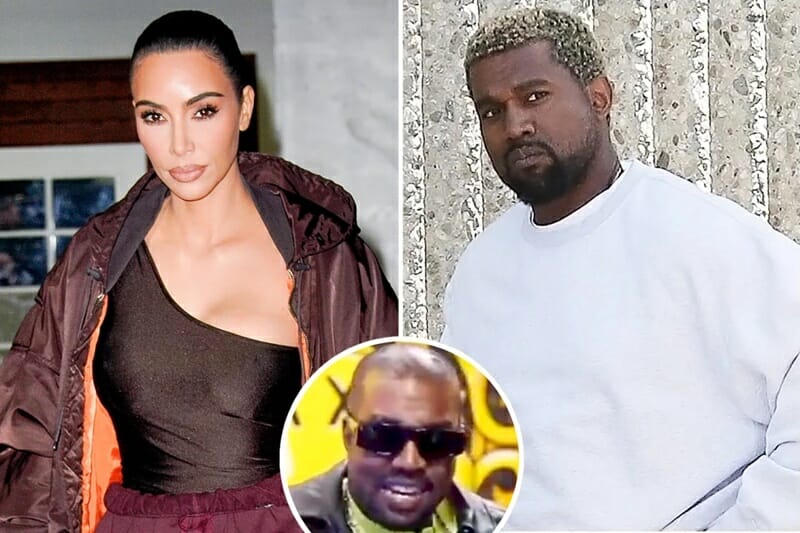 Recall that the rapper appeared on the Drink Champs podcast and went on an epic rant about his estranged wife saying she was still his wife and the kids didn’t want their parents to get divorced.

According to the paper, Kim may even take legal action to keep Kanye from talking about her and the kids.

According to a source who spoke with HollywoodLife, Kim is done playing nice and is even ready to send a “cease-and-desist letter” letter, if necessary.

“Kanye said that he really thought that he and Kim were going to work it out; Kim never gave him any indication of this.

“If anything, his actions of going on the podcast have made Kim more certain than ever that they are done.”

And Kim is apparently prepared to take her separation to the next level.

“If Kim has to send a cease-and-desist letter to just stop him from continuing to talk about her and the kids, she will. It’s not what Kim wants to do, but it may be what she has to do.”

On last week’s podcast, Kanye insisted Kim is still his wife and wants them to be together.

After noting the public keeps saying the pair is “divorced,” Kanye said: “We’re not even divorced.

“This ain’t no joke to me. My kids want their parents to stay together.

“I want us to be together.”

He then said that the entertainment industry and the media are against them as a couple, continuing:

“If you look at the media, that’s not what they’re promoting.

“That’s not what they want.

“They want it to be a new episode, a new TV show.

“And then they have people all around in my wife’s ear.”

Kanye then slammed Kim’s publicist for encouraging their split, saying: “I don’t f**k with her.”

Last month, the Kim shocked fans when she kissed actor Pete Davidson during their satire sketch of Disney’s Aladdin on SNL.

Romance rumors then began to swirl when the pair were spotted holding hands during a trip to Knott’s Scary Farm in California.

There is also speculation Kanye has moved on with a model named Vinetria.

She and Kanye were reportedly in Miami together when he recorded his Drink Champs interview and she alsi recently attended one of the hitmaker’s Sunday Service events in Los Angeles.

They were first seen together publicly at Donda Academy’s debut basketball game in Minneapolis.