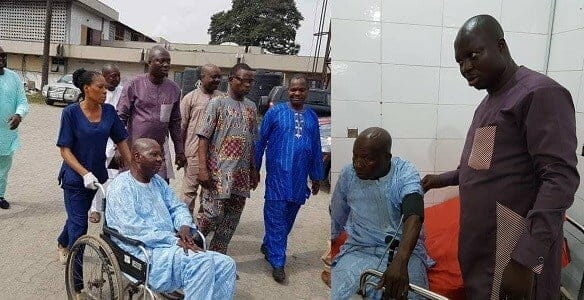 While speaking with the News Agency of Nigeria (NAN), Salami, who described Omidina as an extraordinary comedian, said he has left a huge vacuum in the Nigerian Comedy industry.

He said that he had believed that late Omidina would recuperate soon only to be confronted with the news of his demise.

“We thank God for everything.

”Baba Suwe is someone we have been looking forward to that one day, he will get well, but almighty Allah has taken His decision. There is nothing we can do about it.

“We can only pray that his soul rest in perfect peace and may almighty Allah forgive his shortcomings and stand by his relations to bear the huge loss.

“Unfortunately, his demise left huge vacuum in the Nigerian comedy industry. His fans started missing him a long time ago, when he became ill.

“He is a talented person. A clown. Whatever he does or says appeared funny. His colleagues, too, will miss him greatly,” he said.

Some other Nollywood celebrities also took to their instagram pages to mourn late Omidina as Kolawole Ajeyemi wrote” Rest on Legend. Sad!

Also Yomi Fabiyi wrote “The king of comedy, you are a star, rest in peace”.

NAN reports that Babatunde Omidina was born on Aug. 22, 1958, at Inabere St., Lagos Island, where he grew up, but hails from Ikorodu Local Government Area of Lagos State.
Omidina began his acting career in 1971 but came into limelight after he featured in a movie titled “Omolasan”, a film produced by Obalende.

He became more popular after he featured in “Iru Esin” in 1997.
He had featured and produced several Nigerian films such as: Baba Jaiye Jaiye.

In 2011, he was accused of cocaine trafficking by the National Drug Law Enforcement Agency (NDLEA), an allegation that was described as false and defamatory by the ruling of the Lagos High Court of Law.
Omidina suffered poor health in 2018, prompting many Nigerians, including Vice President Yemi Osinbajo, to donate funds for his medical treatment aboard. (NAN) (www.nannews.ng)