The social media a few hours ago was agog with video of Wizkid grabbing the backside of Tems as he tried carrying her while performing on stage.

We earlier reported that the singers moved closer to each other during their performance, and Wizkid suddenly surprised everyone as he grabbed Tems’ backside.

However, Tems did not allow Wizkid to carry her up as she subtly brought down his hands and disengaged from him, and the crowd were heard shouting over the hilarious scene.

Reacting to this, netizens urged Wizkid to take things easy with Tems as her heavy backside is too big for him to carry, adding that he should not mistake Tems for Tiwa Savage.

Some Twitter users who frowned over the video demanded an apology from Wizkid for trying to carry Tems without permission on stage.

A supposed fan of Wizkid who shared the video said that Tems also need to apologise to Wizkid for how she touched him.

The fan pointed that Wizkid also seemed uncomfortable in the video but couldn’t tell Tems.

He wrote: “See how she’s rubbing him. Omg I’m sure he was uncomfortable but couldn’t tell her. Tems need to apologise” 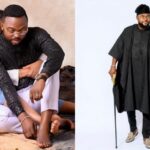