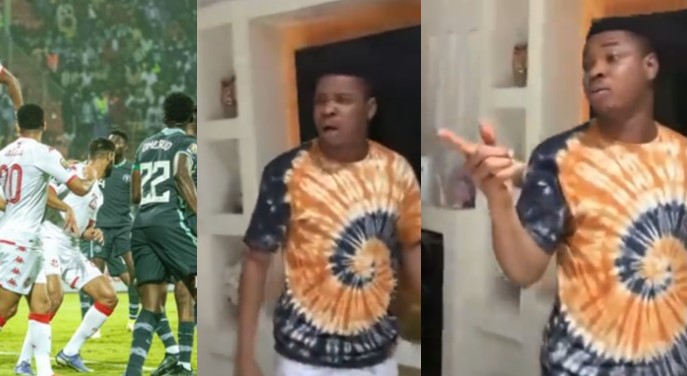 Nigerian comedian, Woli Agba was not so pleased with Super Eagles loss to Tunisia in the 2021 Africa Cup of Nations in Cameroon, and he took it out on his wife.

Tunisia qualified for the quarter-final of the Africa Cup of Nations (AFCON) after beating Nigeria 1-0 on Sunday, January 23.

The Carthage Eagles went ahead in the early minutes of the second half, and although they fought hard, the Super Eagles could not muster a comeback.

After the final whistle was blown, Woli Agba put off his TV in anger and was very furious over the result of the match.

As he was venting, his wife interjected and this seemed to provoke him as he said that it could led to their divorce.

When she continued taking, he then firmly demanded a divorce from her, though it partly seemed like a joke, but he also shouted on his child who moved close to him while he was in angry state.

BBNaija’s Maria opens up on friendship with…

Fidelis Anosike plays down rumours of crisis in…