Nollywood Actress, Funke Akindele has consoled her colleague, Kemi Afolabi after she cried out for help and panic over a possible ill health which she claimed that it is a side effect of staying away from sex for a long period.

Recall that Kemi Afolabi was once married to Wale Adesipe, a UK-based building engineer and contractor. He’s a graduate of the University of Bedfordshire, England. The union produced a daughter named Darasimi Adesipe.

They went separate ways a few years ago over irreconcilable differences and afterwards, the actress allegedly had an affair with junior colleague, Gida.

Sharing a video that highlights heart attack as one of the consequences of not having sex regularly, Kemi Afolabi cried out saying;

“Ah God pls save me o. I have been on sex break for more than a year sha. hmmmnnn who will help me bayii ? As I no get partner. I will not die of heart attack insha Allah. Amin.” 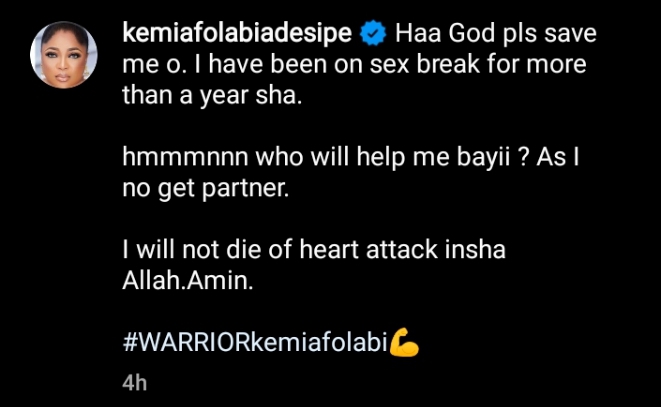 And Funke Akindele responded with;

“You WEY baba God is preparing a better man for. You will be fine my sister”