Veteran Actor, Hanks Anuku has broken his silence on his current condition.

Recall that a video clip was shared on Instagram by Nigerian blog gossipmilltv. A yet-to-be-identified person believed to have shot the video could be heard calling on people to come to the aid of the Actor who was reportedly spotted seated under a streetlight drinking alone at dawn in Ghana .

Few hours ago, Hanks took to his Instagram page to share a video of himself looking well and healthy — a far cry from his rumored appearance in the past days.

The Movie Star also stated that he is currently in his mother’s village at Asaba, shooting a movie with colleague, Zubby Michael and Crew.

Furthermore, Hanks shared another post on Instagram about how one of his die-hard supporters defended him from the Instagram blog who peddled the recent reports about him.

“rebaiuhuruofficial When people need hype this is the kind of things they do just to get some clicks and likes on their post… Whoever own this page be careful before your Ancestors will SLAP you spiritual SLAP..

In the past they said hiv, recently said his dead, but Hank still strong, Alive and in his 62 years now this again popped out and is about Hank again… People should please show some respect… and for those who follow things blindly, Hank is not in Ghana, He is currently in Nigeria working on movie projects and just finished another new movie called (OVIE WHISKEY) alongside ZUBBY MICHAEL… and he will be in Ghana to address things with the President.” 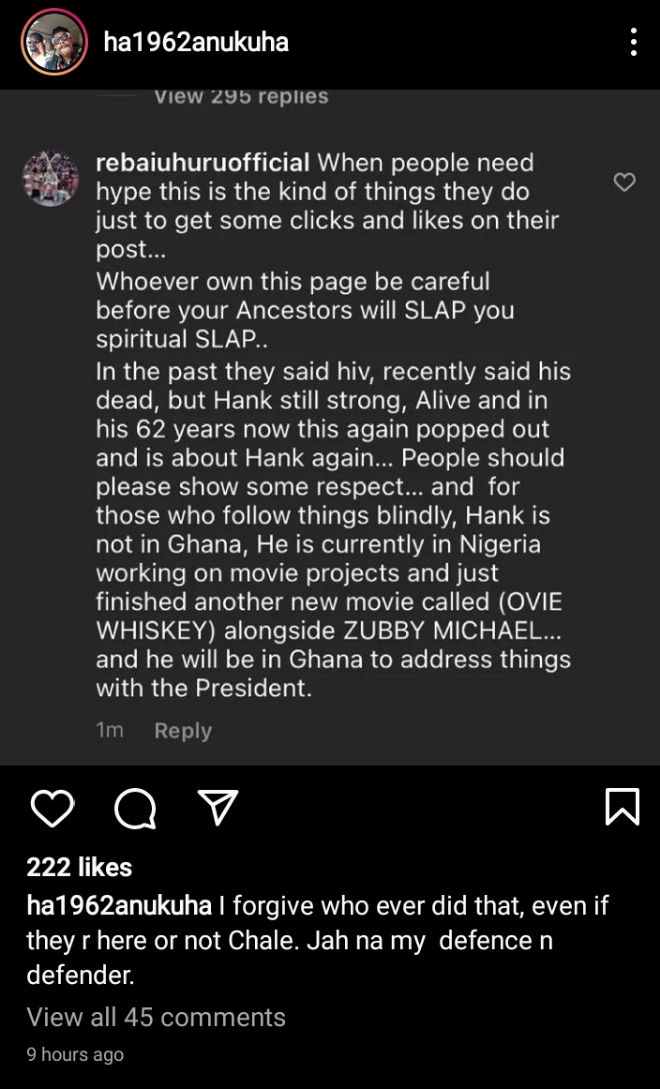