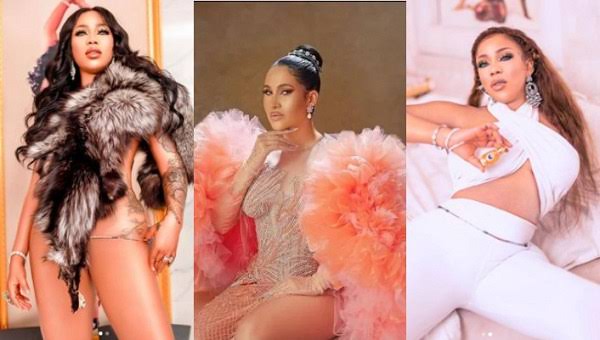 Toyin was previously married to Aremo, who she had her first child, Tiannah with.

According to her, she was with him for 11 years and Caroline ruined her life.

The Entrepreneur accused Caroline of not only ruining her marriage but also sleeping with her ex-boyfriend.

Lawani described the actress as chronic liar who would look one in the eyes and still lie, spilling that she had introduced her to a friend who she still slept with again and almost ruined his marriage if the man hadn’t run back to the UK.

She added by alleging that Caroline’s ex-husband caught her sleeping with small boys.

“Facts still remain, you slept with him. Stop covering your tracks with lies and lie on your child we were not friends, you never slept on my bed..never cooked food in my house, never cried on my shoulder and never grassed me out. While I protected you”.

God knows no such thing happened, carried ur name? My dear I’m sure Miss won’t even back up this lies, they all know the truth about what you did & got caught & I had nothing to do with it, even if I was the one who introduced u to the guy, girl bye, facts you ruined my relationship”

“Stop normalizing my relationship I was engaged mofo and you ruined it, I was chased out with my daughter, my stores were taken from me, I had no clothes on my back cause of u fking wicked bastaaaard, cause I was covering up for you, I was beaten black and blue, you evil wittttch”

“Someone I was with for 11 years you must be sick, you ruined my life but I’m glad I’m not where I used to be, thanks for all you do cause if you didn’t I won’t be where I am today. Go and do the same for yourself, lazy ass, alapamashishe is your ex still not paying ur bills”.

The movie star claimed Toyin didn’t know her married ex had people giving him info of her movements.

Caroline wondered how Toyin can claim her ex caught her (Caroline) with young boys yet he was married to you from 2009 (when he and Toyin parted ways) till 2016.

“Toyin I did not break up your relationship. Rather you did not know your married ex had people giving him info about your movements. I was with you for biz. What the hell is my biz with your affair???.

Toyin makes it make sense to me..how do you know what ended my marriage when my marriage ended in 2016 and I stopped speaking with you in 2009…how can you be part of the break-up when you never existed in it?? Girl stop with the lies, you ain’t that relevant

Toyin you keep saying my ex caught me with small boys..yet he let me stay from 2009 to 2016?? Girl this is the last time I will address you.. I ain’t afraid of no one except the one that can destroy my soul… concentrate on your 33 companies

Remember when your ex brought you to our house party first and last time, Nov 4 2009 I threw you out in front of everyone..your ex should have reminded you. You can accuse me falsely of sleeping with small boys, tell all your friends…zero fucks given”. 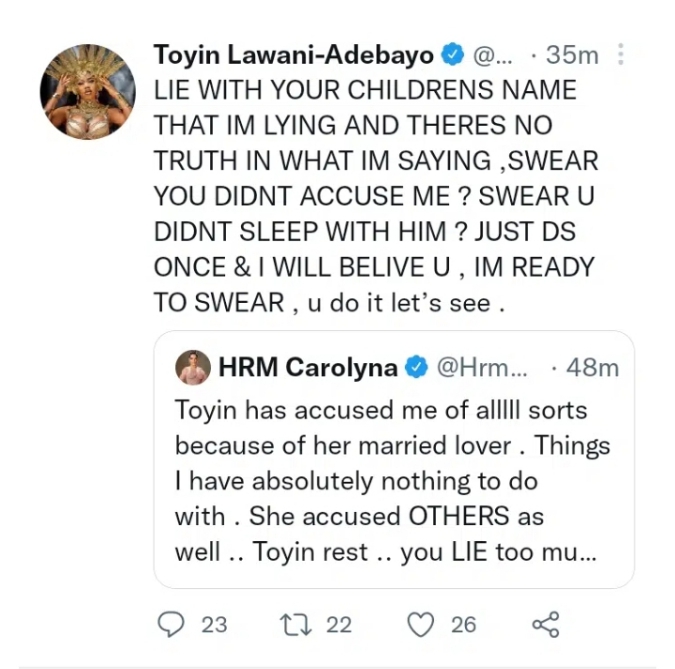 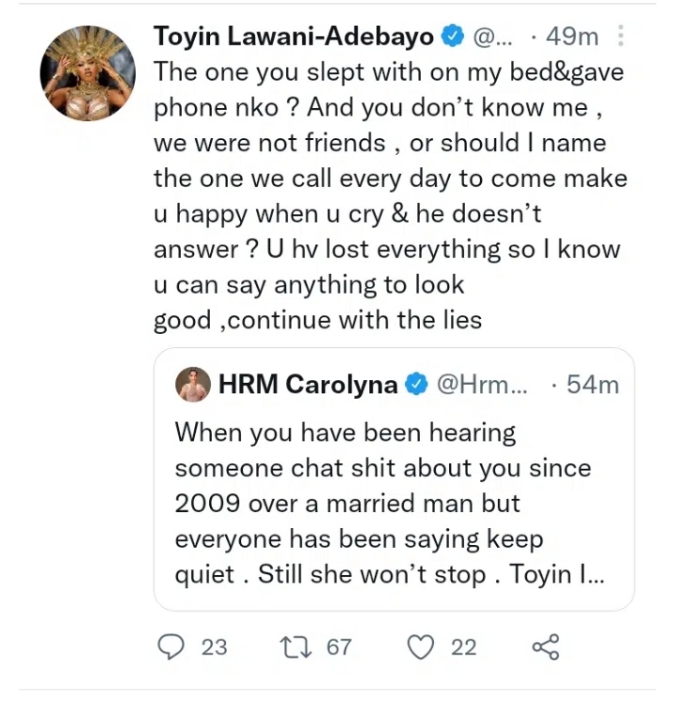 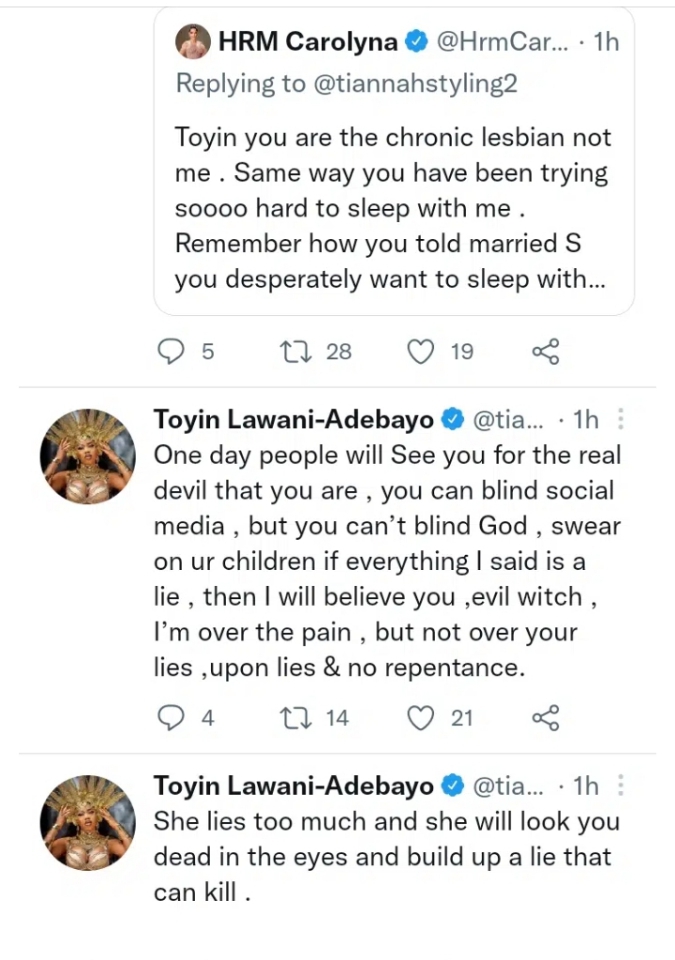 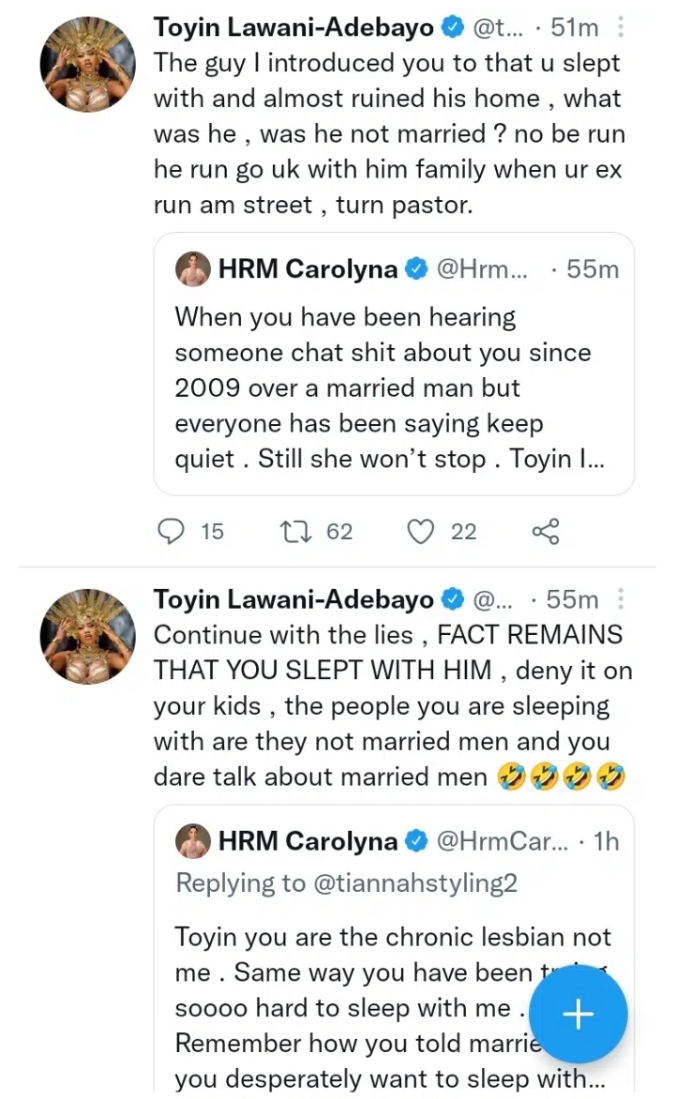 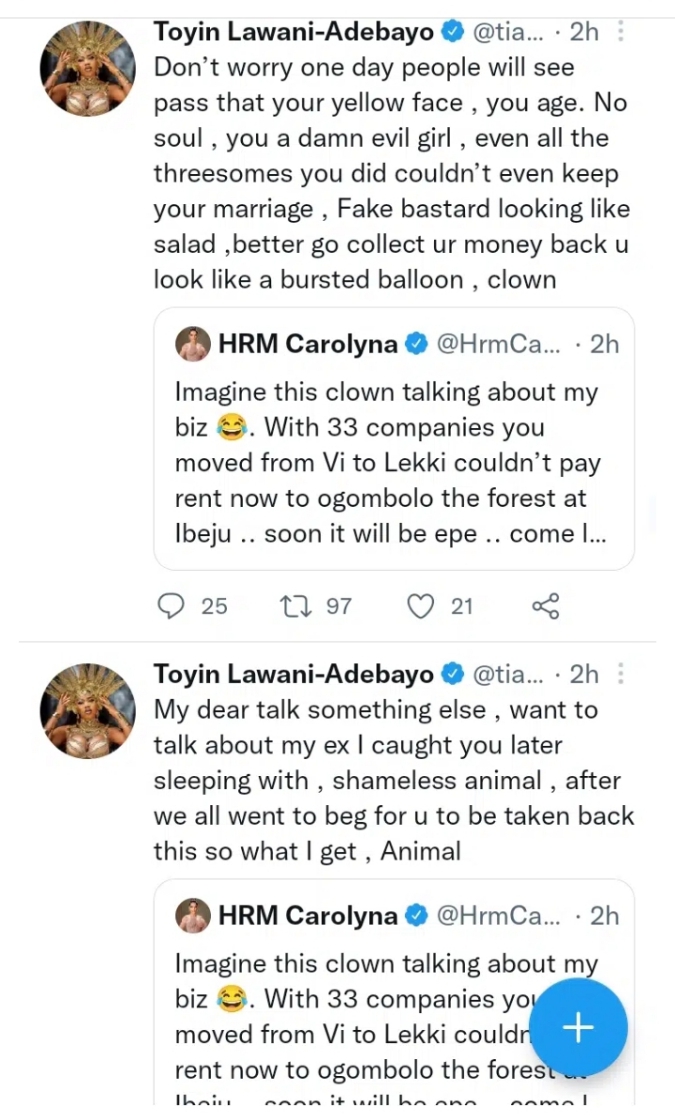