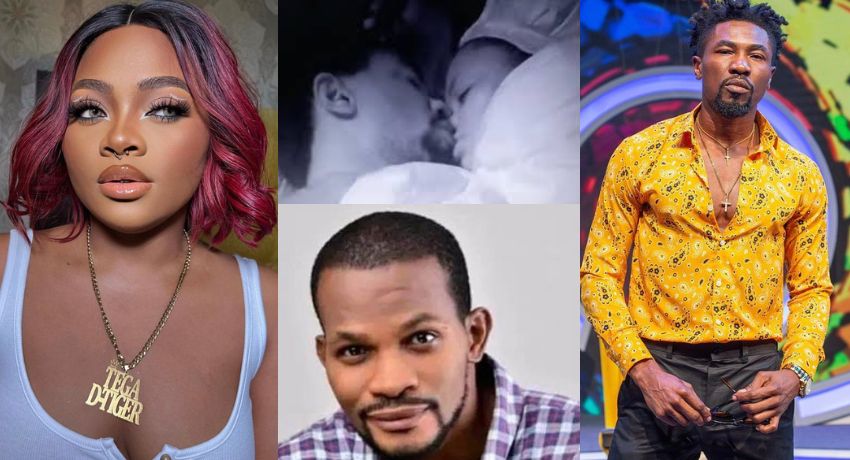 Nollywood actor Uche Maduagwu has faulted Ebuka Obi-Uchendu for what he called Tega Dominic’s ‘mistake’ with Boma in the Big Brother Naija house.

Uche said Ebuka Obi-Uchendu is at fault for permitting the organizers of the show to increase the air-conditioner in the house, there by making the housemates very cold.

He also rebuked Tega over claims of not going into the house as a married woman, asking her to stop justifying her mistake and own up to them instead.

Recall, Tega Dominic and Boma were caught in a compromising state while in the house and they were both dragged on social media, which made Tega come out to apologize for her attitude even though she claimed nothing really happened between herself and Boma.

Tega Dominic speaking about her escapades with Boma during the reunion show claimed she didn’t go into the house as a married woman hence was free to do whatever she wanted to do forgetting that she said it countless times on the show that she’s married.

Uche Maduagwu reacting to her claims of not going on the show as a married woman rebuked her, while asking the reality star to stop justifying whatever she did with Boma because real women own up their mistake. Maduagwu wrote:

Stop justifying Your bbnaija mistake With Boma
Everyone knows the cold for that bbn show fit make even pastor Spread teeth like 3rd Mainland bridge. You no fit move forward. By constantly looking back Accept your flaws and And grow up.

”Dear Tega, the fact that you are still painstakingly trying to #sugar coat what you did with #Boma on the Almighty BBN bed shows you Na never learn you Na lesson, that is even more worrisome, my dear. everyone make mistakes, you came into #bbnaija house claiming to be MARRIED only to spread teeth like #NEPA wire for a random housemate, we understand Na Ebuka fault for allowing the organiser increase AC to highest, #body no be firewood Biko, but turning around after several months to saying your claim of being #married Na Strategy is preposterously childish, real women own up to their flaws.”