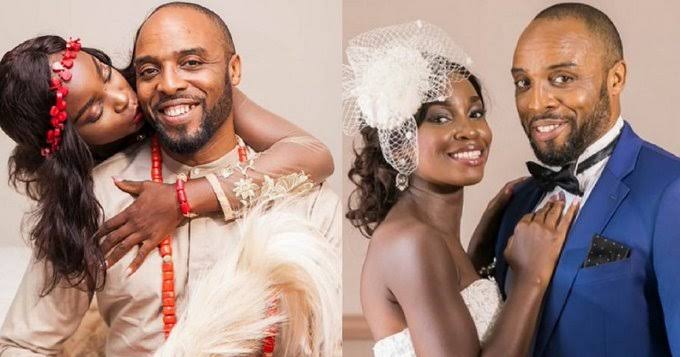 Ijeoma Eze, the estranged wife of Kalu Ikeagwu, has spoken up after the Nigerian Actor dragged her to court over sex denial claims and custody of their children.

Kalu Ikeagwu, on May 30, 2022, told an Ikeja High Court how Ijeoma allegedly deserted their matrimonial home, denied him sex after welcoming their son and prevented him from being the father to his step-daughter.

The actor who is asking for the dissolution of his six-year-old marriage to Ijeoma, also sought full custody of his three-year-old son and ten-year-old step-daughter.

Reacting to his allegations, on Wednesday Ijeoma told the Ikeja High Court, about how the actor’s habit of smoking cannabis made her to be fearful for their children’s safety.

According to her, when she discovered this, she insisted she would be going with them on the strolls.

When her lawyer asked Ijeoma why she left her matrimonial home, she said prior to her leaving, Ikeagwu had called her dad and told him he was no longer interested in the marriage.

The mum of two claimed he wanted a divorce and he would constantly harass her to leave his house, sometimes in the presence of their 10-year-old daughter.

Ijeoma said she stayed back in Lagos for two weeks immediately she left her husband’s house before going to Enugu because her daughter was about to take her School Leaving Certificate Examination and also the daughter’s school’s graduation ceremony was around that period.

The Judge, Justice Christopher Balogun, asked Ijeoma why she did not let her husband know that she was still in Lagos for that two-week period.

She replied that their relationship and communication had not been cordial and that Ikeagwu had been sending her threat messages so she could not have revealed her location to him.

Justice Balogun adjourned the case to July 8, 2022 for continuation of hearing.