Afrobeats Superstar, Wizkid, has finally responded to clapbacks and backlashes from Nigerian Rappers who tackled him on social media over his comment on Rap music.

Big Wiz’s controversial statement where he disparaged rap music by labelling it ‘boring’ and ‘dead’, incurred the wrath of a plethora of Nigerian rap stars particularly, indigenous rapper, Oladips.

The street-hop singer took to his social media page to shade Wizkid with a ‘diss’ track; criticizing his remarks and mocking him for not supporting the Nigerian rap community.

Veteran rapper, MI Abaga also countered Wizkid‘s comments about rap music and went ahead to list names of Nigerian rappers such as Vector, A.Q, Falz, Ladipoe, Blaqbonez, Ice Prince, Ajebo Hustlers and others who are currently the rave of the moment while also noting that the genre is on ‘the rise.’

Blaqbonez and LadiPoe also joined voices to the mix. The Chocolate city Rapper kickstarted the counter challenge with a tweet of his photo with the caption, “I’m not dead, I’m handsome”. LadiPoe then quoted the tweet saying “I’m not dead, I’m sexy”.

Wizkid also made many fans and critics curious after he announced via Twitter page on Friday afternoon that he has a “special announcement” on December 3.

Well, the ‘Essence’ crooner, in reaction to backlash trailing his comment, took to his Snapchat on Saturday, December 3, to drag the Nigerian rap industry.

He also listed his favorite rappers in Africa.

“Y’all not even rappers! nasty C/Sarkodie/ black sherif the only rappers in Africa. Y’al dumb fucks 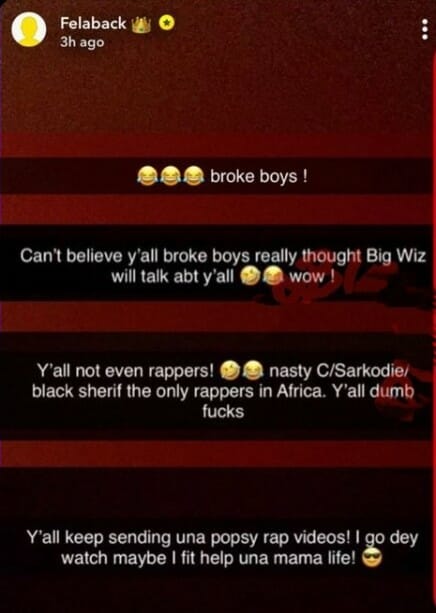