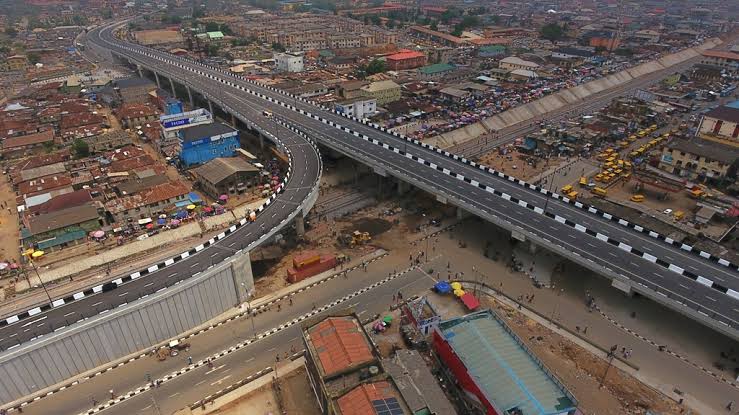 The Agege Local Government Area has renamed the Old Ipaja Road as Bola Tinubu Road in honour of the national leader of the All Progressives Congress and former governor of Lagos State.

Ganiyu Egunjobi, chairperson of the council, while delivering his message of goodwill, at the inauguration of the Agege-Pen Cinema flyover on Friday, thanked Mr Tinubu for laying the foundation for progress in the state.

Mr Egunjobi also renamed Dopemu Road as Babajide Sanwo-Olu Road, in gratitude to the governor for completing the bridge.

The council boss said the “benefits of having the bridge constructed are enormous.”

The News Agency of Nigeria (NAN) reports that the 1.4-kilometre bridge with ramps constructed from precast/pre-stressed reinforced materials was awarded in January 2018, during the administration of former governor Akinwunmi Ambode.

The Agege-Pen Cinema flyover was conceived to transmit vehicular traffic across intersections at Agege to tackle gridlock on the axis.

The News Agency of Nigeria (NAN) reports that as early as 9:00 a.m., various cultural groups, mostly youth in different clusters danced under the flyover and in various adjoining streets.

Tents were erected around the Iju bound lane under the bridge intersection bearing names of various lawmakers representing the area, council leaders and market groups with the supporters colourfully dressed.

Security was beefed up on the bridge where the governor was to perform the inauguration, however, the celebration spread there as visitors were screened in by security operatives.

The event was attended by the speaker of the Lagos State House of Assembly, Mudashiru Obasa, who was escorted to the event by all the 40 lawmakers representing various constituencies.

Mr Obasa represents Agege Constituency at the House of Assembly.

The crowd went into a frenzy with the arrival of Mr Tinubu, as shouts of ‘Jagaban’ rented the air.

The Special Adviser to the Governor on Works and Infrastructure, Aramide Adeyoye, while taking her opening speech, listed recently inaugurated projects which demonstrated the administration’s commitment not to leave any division behind in its road construction and regeneration drive.

Mrs Adeyoye announced that “by the grace of God we shall be inviting you soon to yet another commissioning of the completed Ariyo (Mile 10), Ira-MuwoIra-Muwo Bridge in Ojo Local Government Area.”

“The Pen Cinema intersection as you all know is one of the busiest in Lagos, given its conflicts around the six major routes leading into it. namely Abule Egba, Ogba, Agege Oja, Iyana Ipaja, and Iju,” she said.

The special adviser said the project was embarked upon to tackle the daily gridlock in the Agege axis, with thousands of motorists spending hours with the accompanying travel inconvenience, loss of productive man-hours resulting in trauma and stress.

“The solution to this traffic transportation problem was conceived in September 2017 in the construction of a Flyover across the Pen-Cinema intersection in addition to the spur linking Old Abeokuta Road.

“This landmark project aside changing the skyline of the area would indeed ease traffic gridlock tremendously.

“The project in its entirety consist of a dual carriageway 1.4km, Flyover Bridge component with 2 lanes of 3.65m width each in either direction with ramps, including the rehabilitation of five adjoining roads,” she said.

Earlier, Mr Tinubu had praised Governor Sanwo-Olu’s administration for putting the state on the path to progress.