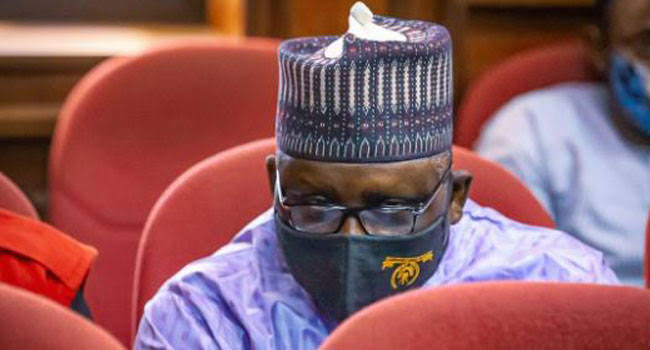 WITHIN NIGERIA recall that Justice Okon Abang had on Maina’s request issued a subpoena compelling the AGF, Magu and nine others to come before the court on March 9, 10 and 11 and testify for the defendant.

But at the resumption of proceedings on Wednesday, none of the invited persons was in court.

Maina’s lawyer, Sani Katu (SAN) also did not inform the court that any of the subpoenaed witnesses was in court.

Instead, he applied orally to withdraw from the case.

He was silent on why he sought to withdraw.

Had his application been granted, Katu would have been the fifth defence lawyer to withdraw since the case started.

When Katu applied to withdraw on Wednesday, lawyer to the EFCC, Farouk Abdullah objected, arguing that the defence lawyer failed to comply with Section 349(8) of the Administration of Criminal Justice Act (ACJA).

Section 349(8) of ACJA states: “Where a legal practitioner intends to disengage from a matter, he shall notify the court, not less than three days before the date fixed for hearing and such notice shall be served on the court and all parties.”

Ruling, Justice Okon Abang rejected Katu’s claim that he had discussed his withdrawal, off record, with the prosecution lawyer, noting that discussions between lawyers were not binding on the court.

He described Katu’s request to withdraw as one “done in bad faith,” adding that “M.S Katu has not offered any reason for seeking to withdraw from this matter.

“His application to withdraw is to compound issues and to hold the court to ransom. In any event, from the record from the court, a notice has not been filed before the court.

“The obvious lapses on his part cannot move the court to grant this application. The application to withdraw legal representation and cause confusion in the matter lacks merit and is accordingly refused,” Justice Abang said.

He also rejected Katu’s further request for adjournment to enable him file a formal application for withdrawal. The judge then ordered the first defendant to produce his second witness.

Rather than call his next witness, Katu told the court that his planned witness, Charles Enakaeno was involved in an accident and could not attend court.

Katu sought a further adjournment, relying on Section 396 of the ACJA, a request Abdullah did not oppose.