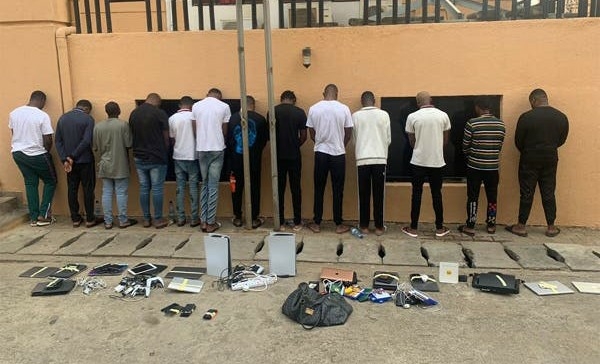 Operatives of the Economic and Financial Crimes Commission on Thursday smashed cybercrime syndicate hideouts in Abuja and took into custody no fewer than 13 key suspects of financial crimes in the process.

The operation was conducted by operatives from the Abuja Zonal Office, which initially picked up their first set of five suspects from an upscale estate in Jahi District of Abuja and then swooped on another set of questionable characters from Katampe Extension District of the FCT.

Both sets of suspects were taken away from the expensive residential areas where annual rents for a flat gulp as much as N8 million.

A statement signed by the Spokesman for the EFCC, Mr. Wilson Uwujaren, who confirmed the arrest of the suspects in a statement made available to Vanguard, said that the breakthrough followed actionable intelligence on their alleged criminal enterprise.

The statement indicated that incriminating items recovered from them include iPhones, laptops, gaming consoles, one Toyota Avalon and a Lexus SUV.

The statement added: “The suspects have given valuable information and will be charged to court as soon as investigations are concluded”.