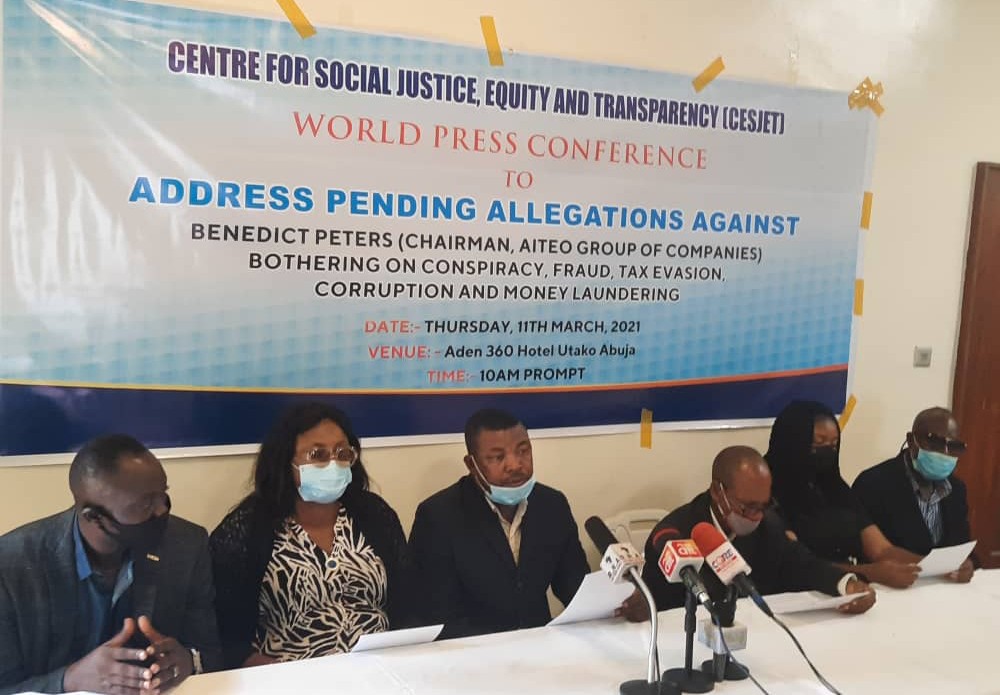 EFCC urged to prosecute Benedict Peters for tax evasion, others

The Economic and Financial Crimes Commission, EFCC, has been called upon to arrest and prosecute Mr Benedict Peters, Chairman, Aiteo Group of Companies,  over allegations bordering on conspiracy, fraud, tax evasion, corruption and money laundering.

Centre For Social Justice, Equity And Transparency (CESJET), who made the call at a press conference in Abuja, said no stone would be left unturned until justice is done against Peters.

According to Comrade Tobias Uloko, Director of Communication, CESJET, the EFCC should investigate several oil deals Aiteo Chairman have been involved in, which he taps his massive wealth from.

He said, ”As we speak, Mr. Benedict Peters owns tank farms in Lagos and Port Harcourt as well as other oil facilities in several countries across Africa. He was also alleged to have taken part in the controversial crude oil SWAP deal involving the exchange of crude oil for refined petroleum products in which the Nigerian National Petroleum Corporation (NNPC) during the reign of former President Goodluck Jonathan gave out 445,000 barrels of crude per day to nine companies through the Pipelines Product Marketing Company, a subsidiary of the NNPC.

”You will recall that the EFCC declared Mr. Benedict Peters wanted at a point but was later left offntje hook. As an organization fighting for social justice, we believe that EFCC has more work to do especially under its new leadership. We are happy that the young and vibrant Mr Abdulrasheed Bawa, who recently took over affairs of the Commission has already hit the ground running.

”Earlier, on 15th February, 2021 we wrote the Commission a petition drawing its attention to the need to revisit the allegations of various economic crimes against Mr. Benedict Peters with a view to bringing him to book.

”Our petition which gave an ultimatum of 7 (Seven) working days was to make EFCC reopen investigations into the allegations chronicled therein so it can arraign Mr. Benedict Peters in a court of competent jurisdiction. We have acted in this direction on the consolation that nobody howsoever highly placed is above the law and there is no limitation to criminal prosecution in Nigeria.

We had threatened to further ventilate our grievances by jumpstarting mandamus proceedings to compel the Commission to do the needful in the event that our demand was not met. CESJET believes that apart from sending Mr. Benedict Peters to jail as quickly as possible, he should be made to refund whatever benefits derived from the fraudulent tax evasion, money laundering and outright theft of government funds in the name of oil subsidy.

”We call on the EFCC Chairman to act fast by arresting and prosecuting Mr. Benedict Peters now based on our earlier petition before Nigerians begin to feel that he is above the law. Justice delayed most times, becomes justice denied!”