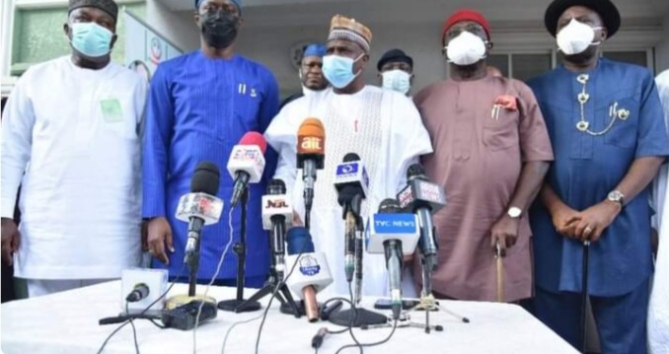 We will support FG fight against insecurity, PDP governors declare

The main opposition party, People’s Democratic Party (PDP) governors’ forum has stated that it will support the federal government in its fight against insecurity.

Recall that there have been several attacks across the country in the past months — including the abduction of hundreds of children from schools — and the federal government has been intensifying efforts aimed at addressing insecurity.

At a meeting led by Aminu Tambuwal, governor of Sokoto and chairman of the forum, the PDP governors said the nation’s security challenges, especially banditry and insurgency, require the cooperation of all, irrespective of party inclination.

“The meeting further resolved to continue to collaborate with the Federal Government to fight the scourge of insecurity bedevilling the country and urged the Government to take necessary steps to engage all major stakeholders,” a communique issued at the end of the meeting reads.

“States that bear the major brunt of the security challenges should be supported more by the Federal Government to secure the country.

“The Forum reviewed the economic situation in the country and noted the recent increase in crude oil prices. It urged the Federal Government to use this opportunity to further diversify the economy and provide the enabling environment for Nigerians to thrive in all sectors.”

The forum also noted that none of its members is contemplating leaving the party, and urged Nigerians to ignore “mischief makers” trying to sow seeds of disunity in the PDP.

The forum also said there is no division in its ranks, adding that the PDP governors are concentrating on ensuring development in their various states.

The governors in attendance included Douye Diri of Bayelsa, Bala Mohammed of Bauchi, Bello Matawalle of Zamfara, Ifeanyi Ugwuanyi of Enugu, and Godwin Obaseki of Edo.

Former Senate Presidents Bukola Saraki and Pius Anyim were in attendance, as well as Ibrahim Dankwambo and Ibrahim Shema, former governors of Gombe and Katsina, respectively.