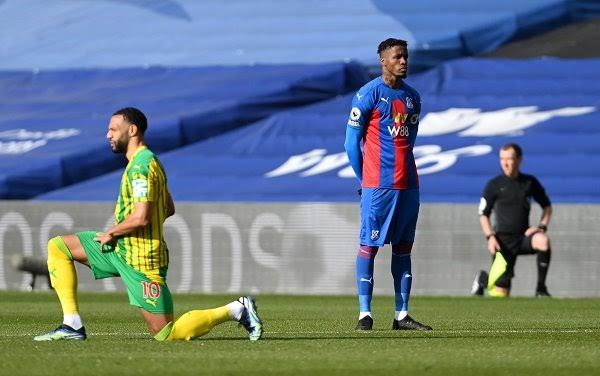 EPL: Wilfred Zaha becomes first player not to Kneel before a game

It has become a tradition for players to kneel in sports to tackle the fight against racism.

But Zaha chose to keep standing, as the other 21 players knelt before the game against West Brom on Saturday.

The Ivory Coast international feels that an anti-racism message is being lost.

Zaha has insisted he remains committed to the fight, but suggests a fresh approach is required.

A statement from Zaha explaining his actions read: “ I feel like taking the knee is degrading because growing up my parent just let me know i should be proud to be black no matter what and I feel like we should just stand tall.

“There is no right or wrong decision, but I feel kneeling has just become a part of the pre-match routine and whether we kneel or stand, some of us continue to receive abuse.

“It’s becoming something that we just do now and that’s not enough for me. I’m not going to take the knee, I’m not going to wear #BlackLivesMatter on the back of my shirt because it feels like it’s a target.

“We’re isolating ourselves, unless action is going to happen, don’t speak to me about.

“As a society, I feel we should be encouraging better education in schools, and social media companies should be taking strong action against people who abuse others online – not just footballers.

” I recognise the work football is doing behind the scenes to tackle the issue, and I will always respect my teammates and those at other clubs who continue to take the knee.”