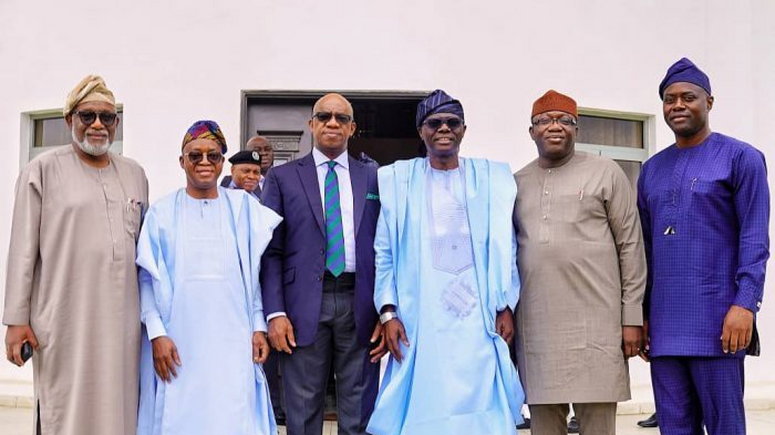 Why South-West governors are afraid of Buhari – Afenifere leader, Adebanjo

The acting Leader of the pan-Yoruba socio-political organisation, Afenifere, Chief Ayo Adebanjo has revealed the reason why South-West governors are afraid of President Muhammadu Buhari.

Adebanjo said governors from the South-West region are afraid of President Buhari because they are under the National Leader of the All Progressive Congress (APC) Bola Ahmed Tinubu who himself is under Buhari because of his 2023 presidential ambition.

The Afenifere acting leader stated this during an interview with The PUNCH.

The 92-year old said that they are deceiving themselves that President Buhari would hand over to Tinubu since they supported him Buhari to become Nigeria’s President.

He said ” That is correct and the reason is that many of them are under Tinubu. The exception is the Governor of Oyo State, Seyi (Makinde). They are all under the canopy of Tinubu, who himself is under the canopy of (the President, Major General Muhammadu) Buhari. But they are deceiving themselves that Buhari would hand over to him (Tinubu) since they supported him (Buhari). I have said it openly before and I would say it again that Buhari is deceiving Tinubu and Tinubu is deceiving Buhari. I’m an old man and I’m a funeral candidate already, so quote me. If Tinubu contests the primary in APC today, he will fail.”

He added ” That is why I said you should quote me. I’m not telling you what people say, I want you to write what I say and when it happens let us see who is right. People talk about an agreement between them, but Buhari is deceiving him and he (Buhari) has an agenda of his own.”

Speaking on the state of the nation, Adebanjo said “It’s a pity that it’s your (reporter’s) age group that would suffer; it doesn’t concern me. All the time we have been shouting that Nigeria would break, what has Buhari said? What has he said to assuage those fears or to tell people it won’t happen? We just have to keep talking. That is why people are being killed and he sits in the Aso Rock. People were killed and kidnapped and he said we should make friends with our neighbours, and another time, it was to appease kidnappers with government money.

“We are all witnesses. Why are we all living in denial? If the people in government are living in denial, what about the victims? If you live in denial you would die in it. Young people won’t say Adebanjo didn’t warn them. If it’s not living in denial, (Governor Rotimi) Akeredolu asked herdsmen to vacate Ondo State forests reserved because of kidnapping and rape. They tried to change the narrative that he said Fulani people should leave the West. Have you asked yourself, are southerners in the north raping their (northerners) wives; are they killing or kidnapping them? Did he ask northerners to go? No. When they are talking like that, they don’t refer to the offence their people have committed. Have they arrested these people? No. That is why I said Buhari has a private agenda.

“These people killed and raped people in Makurdi (Benue) and the governor, Samuel Ortom, reported the matter to the President that about 70 people were killed. Ortom asked that the Federal Government should intervene. Instead of going after those perpetrators; what did Buhari say, he said go and make friends with your neighbours. When I say Buhari is a fake and he has a private agenda, I know what I’m saying. He wants Fulani to take over and that was why he allowed them to come in.

“When we ask them about the herders killing people, they would say they are foreigners. Government is in charge of security, so how did they enter the country to do damage to your citizens and their property? How many have been arrested not to talk of prosecution? After that, they would go and negotiate with them. If people can’t see, I have said enough. If people don’t make the government realise that they are no fools, they would be taking them for a ride. But some people kept quiet because they were getting the crumbs on the table.”