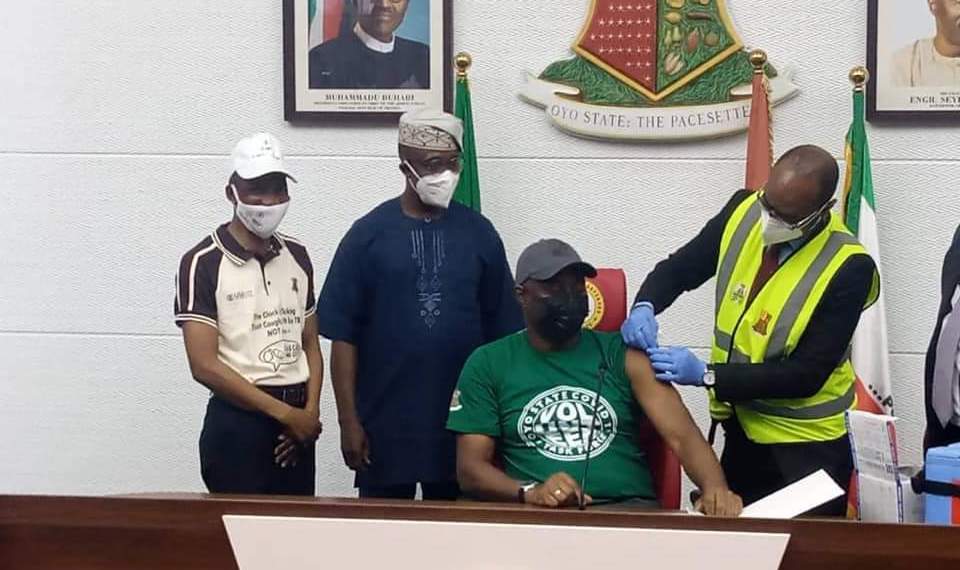 The Oyo State Government on Wednesday joined other states across Nigeria to roll out the COVID-19 vaccination exercise.

The state flagged off the exercise in Ibadan with the first consignment of 127,740 doses it received from the Federal Government.

WITHIN NIGERIA reported that Governor Seyi Makinde was inoculated with Oxford/AstraZeneca vaccine at exactly 12.20 p.m.

During the flag-off, Mr Makinde said the state had made the decision on a sterility test of the vaccine as precautionary measure to ascertain its safety and efficacy.

“I am getting vaccinated today as a show of leadership and to let the people know that they have to be protected.

“I ordered for sterility tests because when I asked questions about the origin of the vaccine, I was informed that the batch that came to the country came from India.

“It is not that I don’t like India or I don’t believe in their products, but I was worried about the storage and I wanted to validate that the vaccines that we will give to the people of Oyo State have been correctly handled.

“The tests were carried out at our two laboratories, the virology and bio-repository laboratories.

“They both came with the same results that the vaccine is good and safe for the consumption of people of Oyo State.

“After the outcome of the tests, it did not take me 24 hours to agree to roll out the vaccines in the state,” he said.

The state received its first consignment of the vaccines from the federal government two weeks ago. The government, however, opted to conduct a sterility test on the vaccines before administering them to people.

After receiving the jab on Wednesday, Mr Makinde urged residents of the state to have trust in the commitment of his administration to ensuring the safety and protection of every citizen.

He lauded the efforts of the frontline health workers in the fight against the pandemic, adding that the state has been a model state among other states.

“I appreciate the health family, you have risen to the occasion and thanks for your dedication, COVID -19 has been better handled in Oyo State than most states in Nigeria.

“We will continue to set the pace in Oyo State.

“We want to also let our people know that the process is open, simple and you don’t have to bribe anyone to get vaccinated,” Mr Makinde said.

According to him, the state will soon overtake other states in the percentage of COVID-19 coverage.

The Executive Secretary, Oyo State Primary Healthcare Board, Muideen Olatunji, said that the vaccination exercise would be in phases.

He added that frontline workers would be prioritised in the first phase.

“The vaccination exercise is going to be in phases, the first phase is meant for frontline workers, followed by the vulnerable above the age of 50 with co-morbidities.

Mr Olatunji noted that vaccines were not for curing diseases but to prevent them.

“The vaccine is not a drug for curing a disease, vaccine is meant to protect us against disease.

READ ALSO: COVID-19: Oyo conducting sterility test on AstraZeneca vaccine
“Vaccine will only trigger antigen and antibody reactions in our system that will now come forward to protect us,” he said.

The State Commissioner for Health, Bashir Bello, reiterated the safety and the efficacy of the vaccine, adding that the state government had taken further precautionary measures to ensure its administration is safe.

“In order to boost confidence in the vaccine, the governor directed us to re-examine and reassess the efficacy and the safety of the vaccine for the common man.