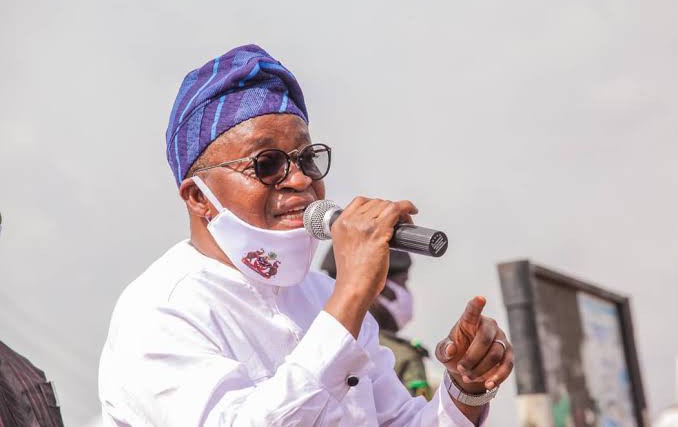 Governor Gboyega Oyetola of Osun, Thursday inaugurated the ‘Osun Food Support Scheme’ to mitigate the impact of the coronavirus pandemic on 30,000 vulnerable citizens.

Oyetola, while inaugurating the programme at the state secretariat, Osogbo, said the initiative was part of his promise to prioritise the welfare and general well-being of the people.

He said the scheme became necessary because available statistics showed that several jobs had been lost with many sources of livelihoods significantly threatened due to the outbreak of the COVID-19 pandemic.

Oyetola said that the scheme would run till the end of his administration.

He said that the scheme would cater for the critical needs of 30,000 poor and vulnerable citizens, including youths, widows, the aged and people living with disabilities, across the state on a monthly basis.

Oyetola said beneficiaries were drawn from the nooks and crannies of the state using the World Bank-sponsored Social Register.

He stressed that his administration’s ultimate goal, apart from feeding the vulnerable in the interim, was to also boost local food production and achieve food security in the long run.

The governor disclosed that the food support scheme had been calibrated, in line with the administration’s policy of promoting small, micro and medium businesses to boost the local economy.

He said that all food items would be sourced locally to further encourage local farmers and businesses.

Oyetola said that to achieve the sustainability of the scheme, his administration, in collaboration with the Federal Ministry of Agriculture, had commenced the clearing of 10,000 acres of land,

He said that part of the land would be allocated to youths who are genuinely interested in farming to engage them effectively and productively.

Oyetola added that 30 per cent of the beneficiaries of the Food Support Scheme were youths.

“Through this scheme, in the first instance, 30,000 beneficiaries across our state will be reached and provided with 5kg of food bags as a token of support.

“To make the exercise hitch-free and transparent, we have constituted a committee made of relevant state functionaries and key stakeholders with representations from the various religious bodies, trade groups, youth groups, minority groups, among others.

“We are adopting the use of the World Bank-sponsored Social Register to cater for the beneficiaries in a manner that is just and equitable across the various nook and crannies of our state.

“We also followed this up with our post-COVID economic recovery plan targeted at empowering over 5,000 SMEs with relevant skills and requisite funding in partnership with the Bank of Industry.

“Through the Ministry of Youths and Sports, we have also been facilitating loans to businesses in the state to support youth entrepreneurship,” he said.