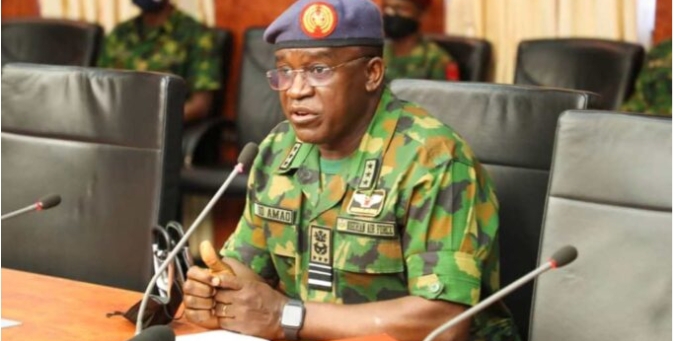 Crashed Jet: We are making efforts to rescue our pilots – Chief of Air Staff

Chief of Air Staff, Oladayo Amao has stated that there are ongoing efforts to rescue the pilots aboard its fighter jet that crashed on Wednesday.

Recall that the fighter jet, NAF 475 operated by the Nigerian air force was on a mission to fight Boko Haram insurgents when it went off the radar and there are concerns that the two pilots on board may have been killed in the crash.

A video showing the downing of a Nigerian Air Force (NAF) Alpha Jet which exploded mid-air has been released on Friday by Boko Haram faction led by Abubakar Shekau.

Hours after the alleged video went viral, some analysts have argued that Boko Haram video claiming to have brought down a fighter jet was doctored.

Speaking with troops of the air force task force of operation Lafiya Dole in Borno on Sunday, Amao said the crashed jet will be recovered.

“On the issue of the crashed NAF alfa jet which was declared missing on 31st March 2021 after losing radar contact, let me state clearly that the videos being circulated on social media alluding that the aircraft was shot down are false,” he said.

“From critical analysis of all available evidence, it is obvious that the air accident was caused by other factors which will be soon made public. You are all aware of the efforts we are making to rescue our pilots and recover the crashed aircraft.

“We are using this opportunity to brief on the next line of action and also to intensify the operation towards rescue of our missing pilots and recovery of our crashed aircraft.

“The theatre command, the air force search and rescue team as well as air component are doing a lot to ensure that we get back those pilots and the aircraft that crashed. Surely the aircraft will be recovered. We will continue to sustain the efforts.”

Amao who said he came to visit the troops to deliver President Muhammadu Buhari’s message, thanked them for their sacrifices toward ensuring that peace returns to the north-east.

He said they are observing this year’s Easter lunch in sober mood as they are still searching for two of their colleagues who were involved in the crash.

“We remember their sacrifices today, even as we celebrate the ultimate sacrifice that the Easter season signifies. May their souls continue to rest in peace and may we find our colleagues who are still missing in action,” he added.