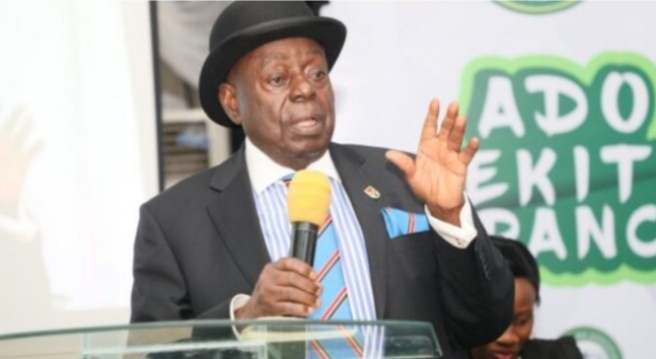 My national conference is a direct response to a request by Osinbajo, Afe Babalola tells presidency

Popular lawyer and founder of Afe Babalola University, Ado Ekiti (ABUAD), Afe Babalola has disclosed that he is organising a national conference to prevent the country from disintegrating.

According to the legal guru, contrary to the assertion of the presidency, the summit will not “throw the country into turmoil”.

Recall that the presidency had alleged that there is a plot to overthrow President Muhammadu Buhari.

The presidency also noted that “disruptive elements are now recruiting the leadership of some ethnic groups and politicians round the country, with the intention of convening some sort of conference, where a vote of no confidence would be passed on the president”.

Reacting on Friday, Babalola said the goal of the conference is to find ways out of the current national challenges.

This comment was made by the legal guru in  a goodwill message at the foundation-laying ceremony of the ‘NBA House’ in Ado Ekiti, capital of Ekiti state.

Babalola said he has been a friend of governments and that his views and counsel have always been respected in the past.

He said the conference is a direct response to a request by Vice-President Yemi Osinbajo, who had blamed the elite for keeping quiet as the country faces a series of challenges.

Babalola said: ”All I am doing, in my own case, is to prevent the country from disintegration and drifting into anarchy so that it can remain an indivisible entity, and not to throw the country into turmoil as being suggested.

”I am here to spend my own money and time to help government return decorum to our dear nation. There must not be anarchy or civil war.”

Babalola had said he will donate N50 million to the conference themed ‘Summit of Hope’.