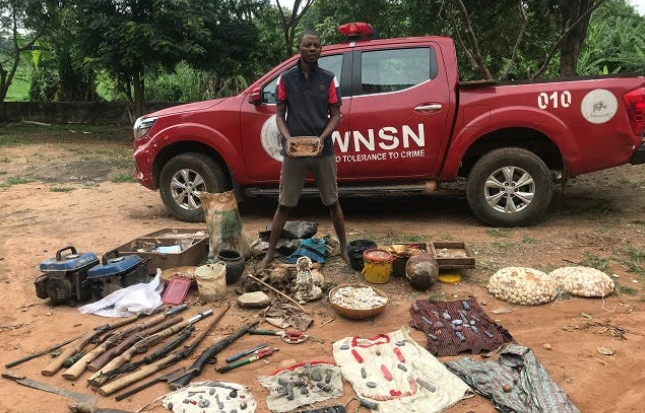 The suspect was arrested on Saturday at about 3 am in his residence at Lagelu Local Government Area of the state.

Speaking at the parade of the suspect at Amotekun’s office on Tuesday, the Commandant, Col. Olayinka Olayanju said that the Abdulrasheed, who was a member of a gang that had been operating for long, was obtaining the human body parts by either killing human beings and cutting them into pieces, as well as exhuming fresh corpses from the grave, which were also being cut into pieces for sale.

Col. Olayanju disclosed that Amotekun had been on the trail of the suspect for months, with the engagement of a young man as a mole, in order to get the details of his involvement in the crime.

The commandant stated further that another suspect, known as Baba Ishola, is currently at large after he became suspicious that Abdulrasheed had been arrested.

He decried a situation whereby some people had been patrons buying human parts from the suspect and his syndicate members, saying that there would not have been sellers if there were no buyers.

He also said that it was baffling that a lawyer had been coming to Amotekun’s office, demanding for the release of the suspect without waiting for investigations to be carried out.

Olayanju added that the suspect would be transferred to the state police command for further investigation.

Speaking with Journalists, Abdulrasheed confessed to exhuming corpses but said he had never engaged in killing anyone in his life.

He said that he learnt about corpse exhumation from his master under whom he trained as a herbalist in Apomu, Osun State.

He said that his master died in 2020, making him lose interest in the act.

He, however, opened up that he took all the body parts his master had to his home in Ibadan, where he dug the ground and kept them.

The suspect confessed to have once exhumed two buried corpses of his neighbours in Monatan area.

He gave the name of one of the deceased whose corpse he exhumed as Buliaminu, saying that he committed the act 15 days after the man was buried.

“Our master used to be the one to tell us to look for body parts. I worked with three others to exhume the corpse. We removed his head, hand, heart and some flesh and returned the remains to the grave,” he revealed.

On the guns found with him, he said that they were meant to instil fear in criminals, as he belonged to Oranmiyan Federal Security Hunters and Crime Prevention, adding that he and others had yet to get cartridges to use with the guns.

He also said that the charms and amulets were meant to protect him and others from attacks, whether ethnic or general.