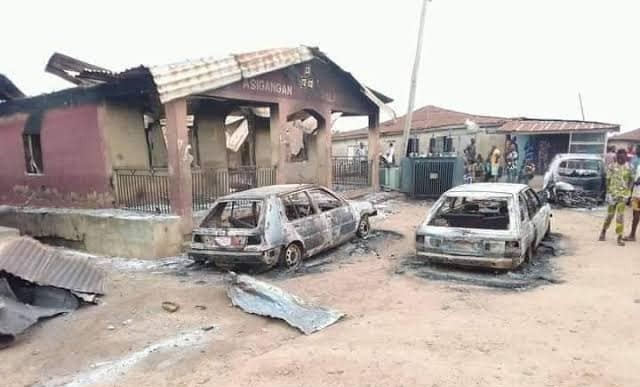 Alaafin of Oyo, Oba Lamidi Adeyemi and a former Secretary to the State Government, Alhaji Sharafadeen Alli, have condemned the Saturday night invasion of Igangan community in Oyo State by unknown gunmen.

The News Agency of Nigeria (NAN) reports that gunmen invaded the community, leaving no fewer than 11 people dead, with several property burnt, including the traditional ruler’s palace.

They told newsmen in separate statements on Monday in Ibadan that the attack was disheartening, discouraging and dehumanizing.

Oba Lamidi Adeyemi said the attack was man’s inhumanity to man and regrettable in spite of efforts to nip the matter in the bud.

He said many persons, including Fulanis, arrested and handed over to the police in Oyo State should face the wrath of the law.

He appealed for calm in the area, adding that efforts were on by security agencies to ensure the crisis does not degenerate.

“To all grieving families; all who have lost properties and those displaced, may God console you all at this auspicious time in Allah’s name I pray,” he said.

Also, former SSG said the incessant attacks on residents of Ibarapa land, especially the Palace of the Asigangan of Igangan land, Oba Adewuyi Olaoye, called for attention of all stakeholders in the state.

Alli, who is the Ekefa Balogun of Ibadanland, sympatised with the family and friends of the victims, calling on security agencies to ensure their killers were brought to book.

He urged Gov. Seyi Makinde to reengineer the security architecture inherited from his predecessor which made Oyo State one of the peaceful states in the country in the past.

“I sympatise with the people of Ibarapa land, especially the Asigangan of Igangan land, Oba Adewuyi Olaoye on the avoidable deaths of some residents of the community.

“The attack on your palace is still something that cannot be explained.
“With the latest development, it is time for us to convey stakeholders’ meeting regardless of our political affiliations in addressing this disturbing issue,” he said.