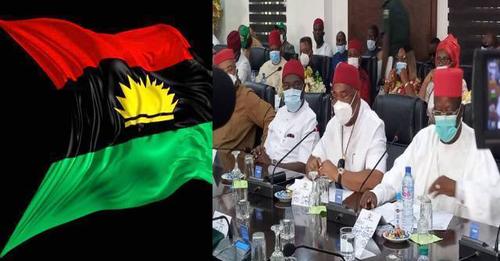 Human Rights Writers Association of Nigeria, HURIWA, has called on the South-East Governors to, without further delay, undo the illegal banning of Indigenous People of Biafra, IPOB, and to convince President Muhammadu Buhari to withdraw the proscription of the secessionist group.

HURIWA made this call in a statement signed by its National Coordinator, Comrade Emmanuel Onwubiko and Zainab Yusuf, its National Secretary, adding that after unbanning the group they can then begin a constructive dialogue in an atmosphere of mutual understanding.

The group said it was illogical for the governors who initially proscribed the group before it was nationally outlawed by Buhari, to pretend not to know how significant their agitation has become.

“In as much as we believe in a united Nigeria, these agitations from all over means that Nigeria’s status quo is unjust and unfair and should be restructured,” the group added.

HURIWA stated that “no reasonable ground for the proscription of IPOB when it is notorious that they are non-violent and indeed all the alleged violent actions attributed to them by the police and Army have been denied by them and also the same organisation enjoys global legal recognition.”

The rights group wondered why the Buhari government has refused to proscribe Miyetti Allah Cattle Breeders Association, MACBAN, for publicly backing armed Fulani herdsmen while the government has maintained the ban on IPOB.

“The Southeast leaders ought to engage IPOB and others to step down their agitations for the break up of Nigeria but to opt for a fundamental restructuring of the country instead.”