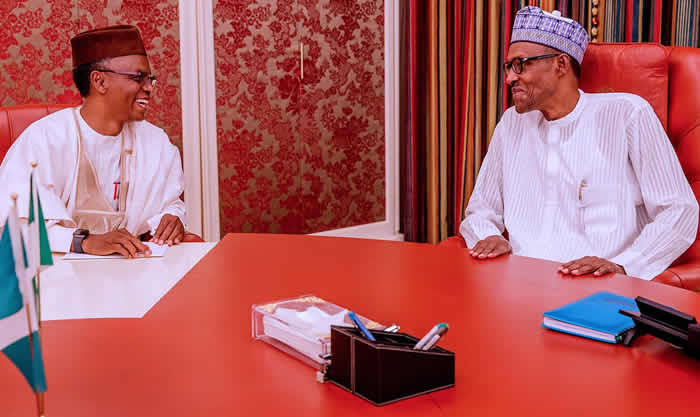 Governor of Kaduna state, Nasir El-Rufai has stated that he briefed President Muhammadu Buhari on the rightsizing policy of the state government and the steps taken to implement it.

This was contained in a statement released by Muyiwa Adekeye, the spokesman of Governor Nasir El-Rufai.

El-Rufai said the rightsizing of the civil service aims to replace lesser skilled staff with better-qualified ones.

He said the government’s commitment to a fair assessment of the credentials of all officers is apparent “in the painstaking approach to the rightsizing exercise for state civil servants”.

“Rightsizing is about getting the optimal number of persons with the requisite skills to staff the public service. More than 10,000 such workers, including 7,600 secondary school teachers are being injected into the public service,” el-Rufai said.

“Kaduna State Government has not yet disengaged any state civil servant but has dispensed with the services of 99 political appointees so far. Only the 23 local government councils and the agencies associated with the local government system such as SUBEB and the Primary Health Care Board have released staff.

“It said that it is only after the completion of the verification process that KDSG will release any civil servant that is confirmed not to possess the minimum qualifications prescribed in 2017 as one of the outcomes of the state’s Public Service Revitalization and Renewal Programme.’’

Fayemi to APC delegates: Do not vote moneybags for presidency

The governor, who has been at loggerheads with the Nigeria Labour Congress (NLC) over the state’s government resolve to disengage 4,000 workers across the 23 LGAs, said a judicial commission of inquiry will be set up to investigate the action embarked on by the union.

“KDSG is determined not to allow a repeat of the pains, economic losses and the restraints of freedom that the NLC inflicted on the people of Kaduna State,” he said.