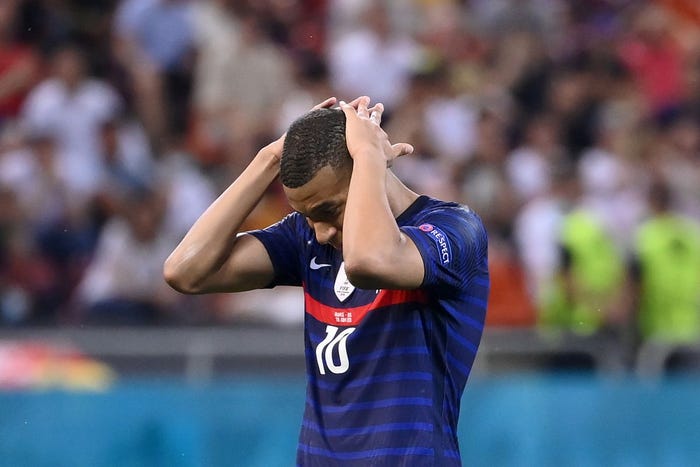 Kylian Mbappe apologised for his failed penalty as France crashed out of Euro 2020 at the hands of Switzerland, with the star insisting he has sleepless nights ahead.

Mbappe had his spot-kick saved by Yann Sommer, whose heroics lifted Switzerland to a shock 5-4 penalty shoot-out victory against world champions France in the last 16 on Monday.

France had rallied to a 3-1 lead with 15 minutes of regulation time remaining after falling behind early to Switzerland in Bucharest, where Les Bleus used Karim Benzema’s quick-fire brace and Paul Pogba’s stunner to turn the match on its head.

Switzerland, who saw Ricardo Rodriguez’s penalty saved for a chance to move 2-0 clear early in the second half, sensationally forced extra time thanks to Haris Seferovic’s second goal and Mario Gavranovic’s last-gasp strike.m

Mbappe was involved in the decisive moment, his penalty kept out by Sommer as France failed to reach the quarter-final stage of a major tournament (European Champion and World Cup) for the first time since the 2010 World Cup.

“Very difficult to turn the page,” Mbappe – who has had more shots (14) without scoring than any other player at Euro 2020 – said in a post shared on Instagram. “The sadness is immense after this elimination, we were not able to achieve our objective.

“I am sorry for this penalty. I wanted to help the team but I failed. It will be hard to sleep but sadly these are the risks of this sport that I love so much.

“I know that you the fans are disappointed, but I would still like to thank you for your support and for having always believed in us.

“The most important thing will be to get up even stronger for the challenges to come. Congratulations and good luck to Switzerland.”