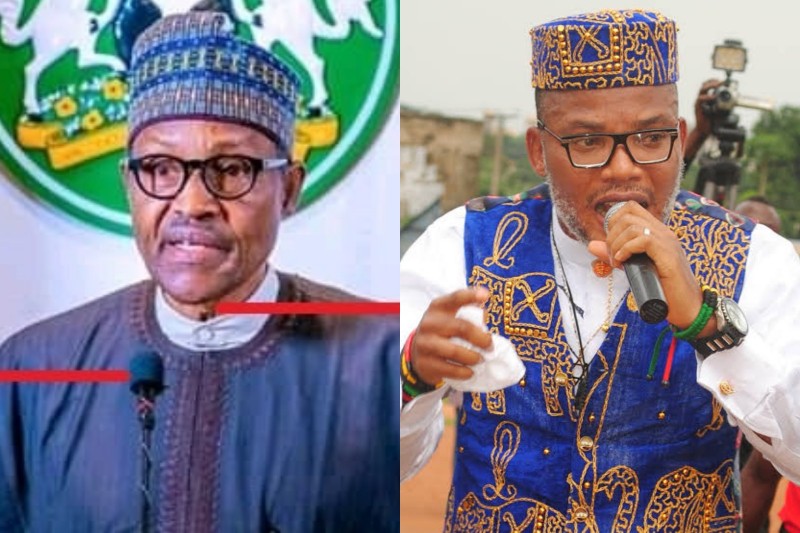 The Biafra Think Tank, and The Biafra Watchdogs have threatened to attack the National Assembly complex, Aso Rock, the Force Headquarters, Nigeria Army Headquarters, among others over the arrest of the Supreme Leader of the Indigenous People of Biafra, IPOB, Mazi Nnamdi Kanu.

The secessionist groups gave President Muhammadu Buhari’s administration within 21 days to release the IPOB leader after which they shall attack major federal government facilities.

WITHIN NIGERIA had reported that the Attorney-General of the Federation and Minister of Justice, Abubakar Malami, had announced the arrest of Kanu during an emergency media briefing in his office, Abuja.

It was gathered that Kanu was arrested by a combined team of Nigerian and foreign security agents in a coordinated interception on Sunday, June 27.

The group gave the warning in a statement signed by 24 of their members on Thursday, directing all landlords in Biafra land to document and send names and other vital information of all their tenants.

They also threatened to kidnap all the ambassadors of the Buhari government including the former Chief of Army Staff, Yusuf Burutai and keep them hostage until Nnamdi Kanu is released.

The statement said, “Every landlord in Biafra land must send the names, phone numbers, pictures if possible, address of any police officers, army, DSS, EFCC, ICPC, CIVIL DEFENSE, Air Force, Navy, Custom, Muslims, be it Hausa, Fulani or any non Biafra leaving in their houses,” the statement said.

“We shall inform the public and the country and airlines that gave out our leader, Kanu’s details and ensure that the staff, plane, and the country pays dearly or we will give their own country
Jihadists or ISIS useful information to attack their government complex.

“Today we have agreed and decided to kidnap all the ambassadors of Buhari government including Burutai and keep them hostage till they release Mazi Nnamdi Kanu and until Buhari signs and declares Biafra.

“We hereby summon all the Biafran sons and daughters working in the USA, UK, EU, AU, army, Navy, Air Force, etc, to attend an important meeting in the USA.