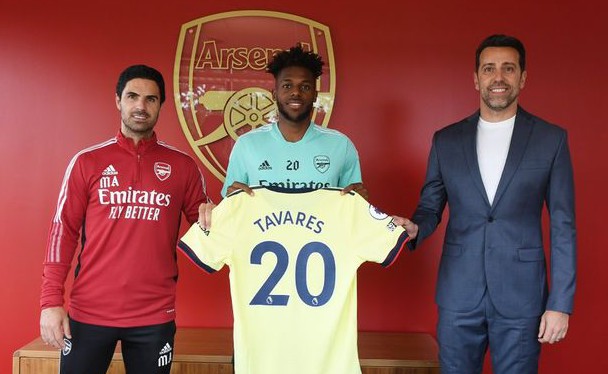 Arsenal have announced the signing of Portuguese left-back Nuno Tavares from Benfica on a long-term contract.

The Gunners made the announcement on their official website on Saturday.

Tavares, 21, developed through the Benfica youth system, making his Benfica B debut in October 2018, before progressing into the first team squad.

He made his first-team debut in the Portuguese Super Cup win over Sporting Lisbon in August 2019.

Over the past two seasons, the Portugal Under-21 international – who is predominantly a left-sided defender – made 25 appearances for Benfica.

He was in the matchday squad for both matches Arsenal played against Benfica in last season’s Europa League last-32, coming on as a late substitute in the second leg.

The young defender, who will wear the number 20 shirt, will join up with his new Arsenal team-mates in the coming days after travelling from Portugal and completing the current isolation regulations for international arrivals into the UK.

Commenting on the new signing Mikel Arteta said: “We welcome Nuno to the club. He is a young player with great promise who has developed very well with Benfica in recent seasons and has also shown his quality by being part of Portugal Under-21s.

“Nuno’s arrival will give the squad extra strength and options in defence, particularly with this energy on the left side of the pitch. We look forward to Nuno’s arrival soon, his integration into the Arsenal family and playing in front of our fantastic supporters.”