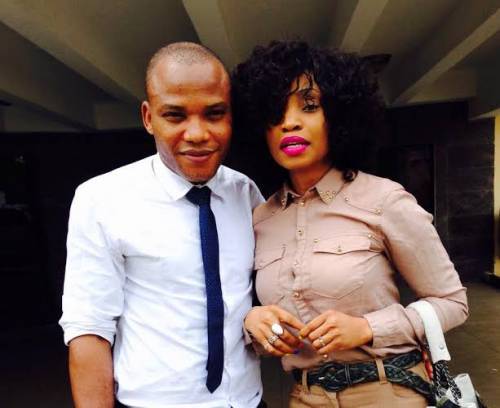 Uchechi Okwu-Kanu, wife of the Supreme Leader of the of the Indigenous People of Biafra, IPOB, Mazi Nnamdi Kanu, has expressed her worry about the welfare of her husband after his arrest and detention by the Department of State Services (DSS).

Uchechi said she’s worried that her husband has been beaten and tortured by the security agencies both in Kenya and Nigeria.

“It’s hard for me to speak. I’m extremely devastated. He has been beaten and tortured and I am scared for his life,” she said.

The 40-year-old stated this during an interview with a United Kingdom newspaper, The Sunday Times on Sunday.

She lamented that none of Kanu’s family members has been able to reach him since he was detained by the DSS.

Uchechi said “I was always worried about Nnamdi. When you’re asking for freedom from dictatorship, you are a target. But when I saw what happened in Belarus and how no one did anything, I knew nowhere was safe.

“The Nigerian government carrying out this rendition is a crime. We’re not even talking about independence,” she said.

“We’re just calling for a referendum exactly like Scotland did with UK and UK did with the EU but the Nigerian government wants to exterminate our whole family. It’s a scandal and thing of shame that Britain is not acting to secure their own citizens.”

Jonathan Cooper,  a human right lawyer at Doughty Street Chambers in London, who is consulting for the Kanu family, warned that the UK risked becoming “complicit in torture” if it did not act in support of Kanu.

“Extraordinary rendition is recognised as a form of torture,” he said.

“We need the UK government to take the lead by condemning the actions of Nigeria and Kenya and by insisting that if Kanu is to be returned to Nigeria, only independent courts can authorise his return. If the foreign secretary, Dominic Raab, continues to say nothing, there is a risk that the UK will become complicit in torture.”