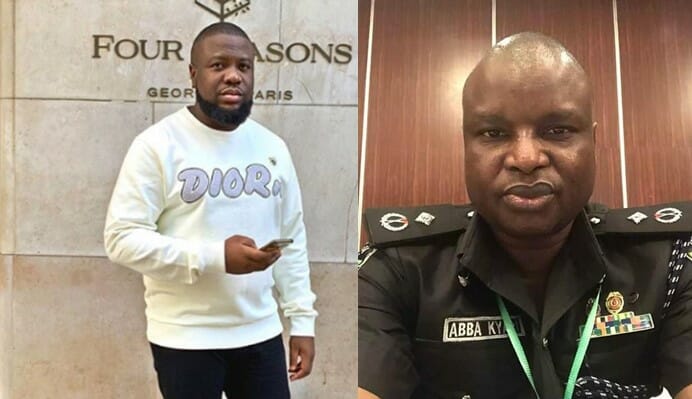 Abba Kyari, Deputy Commissioner of Police and the head of the Inspector-General’s Intelligence Response Team (IRT), has denied receiving a bribe from Ramon Abbas, popularly known as Hushpuppi, a Nigerian Instagram celebrity and fraudster.

WITHIN NIGERIA reports that the United States Department of Justice had said ongoing investigations showed that Hushpuppi allegedly bribed Kyari to arrest one Kelly Chibuzo Vincent, one of his accomplices in Nigeria.

Reacting to the allegations on Thursday morning, the DCP in a statement on his verified Facebook page said his hands are clean.

According to Kyari, nobody demanded money from the embattled Instagram influencer, stating that the focus of the police was to save people’s lives that were purportedly threatened.

Kyari explained that Hushpuppi had informed the police that somebody in Nigeria was threatening to kill his family. He added that the social media celebrity, who was based in Dubai, United Arab Emirates, before his incarceration, also sent the suspect’s phone number, urging the police to act fast to save his family.

He however said the suspect was allowed to go after investigation showed they were long time friends with disagreements over money. Kyari insisted that he did not demand a dime from Hushuppi, saying the only time they had discussions about money was when the fraudster demanded to know who sews his native clothes and caps, adding that after linking both party, Hushpuppi sent N300,000 for five sets of attires.

Kyari said the clothes and caps were delivered to his office after which someone collected them for Hushpuppi. He urged anyone interested in further pursuing the matter to contact Vincent for confirmation.

He urged his supporters to remain calm, stating that those working towards damaging his reputation would be disgraced.

The statement reads in part, “For those who are celebrating that this is an indictment on us and mentioning some fictitious big money, They will be disappointed once again as our hands are clean and our record of service for two decades is open for everybody to see. They will continue seeing us serving our fatherland and we will continue responding to ALL distress calls from ALL Nigerians provided they are life threatening.

“For good Nigerians who appreciate our service, please don’t worry as our hands are clean and they should please not respond to those celebrating and creating many false narratives without any evidence. We are used to such types of people and false newsmakers and distributors”.