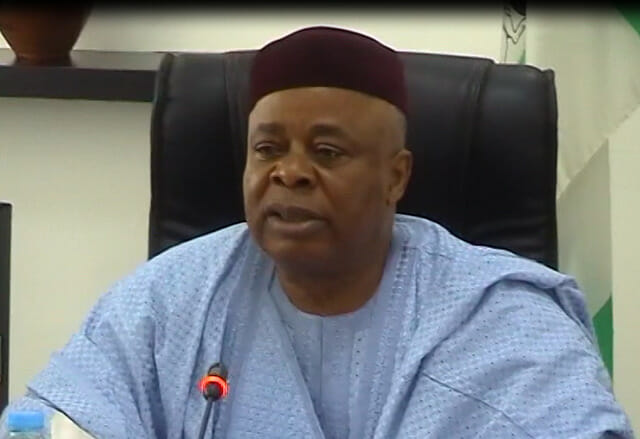 How I made Ribadu drop corruption charge against my kinsman, Chinyeaka Oha – Ken Nnamani

Chief Ken Nnamani, former Senate President, has left many Nigerians stunned following his open confession on how he prevailed on a one-time chairman of the Economic and Financial Crimes Commission, EFCC, Nuhu Ribadu to drop corruption charges against his kinsman, Mr. Chinyeaka Oha.

In a trending video, the former Chairman of the National Assembly told a public gathering that but for his intervention, Oha’s career would have been crippled.

The event was a reception organized in honour of Oha, a retired Federal Permanent Secretary by his Awkunanaw Community, in Enugu South Local Government Area of Enugu State.

Both Nnamani and Oha are from the community.

WITHIN NIGERIA reports that Oha, who is among those believed to be angling to succeed Governor Ifeanyi Ugwuanyi in 2023, was at the time an Accountant-General of Enugu State under former Governor, Senator Chimaroke Nnamani’s administration.

The former Senate President has now revealed how he prevailed on Ribadu to let Oha off the hook.

He said Oha was instead made a witness against his former boss, Senator Chimaroke Nnamani rather than face trial.

“We thank the Governor of Enugu State, Ifeanyi Ugwuanyi for making the state one of the peace loving states in the country. If there is no peace, none of us will be here today.

“We are here to honour someone whom I have known for a very long time, Sir Christian Chinyeaka Oha. While I was in office, he had difficulties when he served at the state level. He was tossed around, they were going to stand for charges in various courts of the land, but our people will say “onye Nwanne ya no n’izu na ikpe adighi ama ya” (Once whose brother is sitting in judgement cannot be guilty).

“I ensured that he did not continue with that harassment. And that helped him to continue till he retired because when I reached Nuhu Ribadu, he was in my house and Chinyeaka was there too. I’m saying this because when you don’t blow your trumpet, no one will do that for you.

“If I don’t tell you, you will not know, I invited both parties so that we look at the matter properly to know what really happened.

“I said was this man directly involved or was he an agent, did he commit anything directly? What really happened? I will like you and him to find solution.

“Then they found solution, they found a very lasting solution. Chinyeaka was made a witness in the matter.

He is a person we can vouch for, a person from a very humble background who knows where he is coming from”, he said.