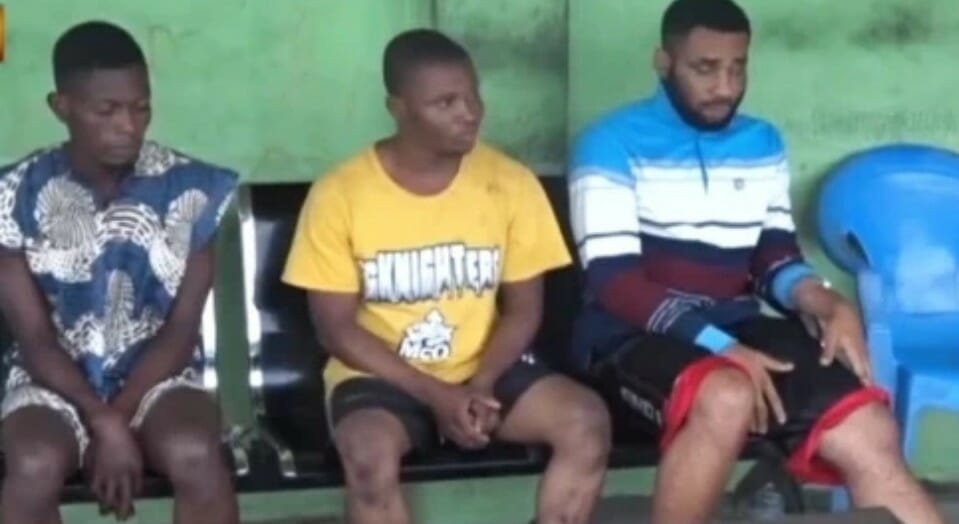 Three suspected members of a kidnap gang have revealed details of their modus operandi, it was learned that the gang was led by a dismissed prison personnel known as ‘General’.

During their interview with AIT News, the suspects revealed how they murdered a businessman in Abia state after invading his residence. Their victim, Jacob, was a father of five children.

The murder of an Abia-based businessman, Jacob Ugwa, has led to the arrest of his suspected assailants. Jacob was reportedly murdered at his residence after a gang of kidnappers attempted to abduct him. The assailants have since confessed to the crime.

According to the report, one of the arrested suspects, Chinedu, is an ex-convict that served a 5 years jail term. Chinedu was reportedly released in February 2021. Chinedu claims that he met their leader, General, while he was in serving time in prison. Chinedu added that the General was an officer working in the correctional facility.

Another suspected member of the gang is Godwin Uche, a motor park tax collector. Monday, a welder, was also arrested. Godwin revealed that his gang invaded Jacob’s residence after trailing the victim during one of their patrols.

Narrating how they killed Jacob during one of their patrols, Monday said,

“We held Jacob in a vehicle while our gang member, UC, attempted to open the gate at the residence. Unfortunately, the victim came down from the car and attempted to escape. UC shot Jacob in the back, and two of the victim’s mobile phones fell from his pocket. I stole one of Jacob’s phones, while another gang member stole the other phone. We blamed UC for not shooting Jacob’s leg, as shooting him in the leg would have prevented Jacob’s death.”

The suspected kidnappers reportedly returned to Jacob’s neighbourhood less than 3 weeks after the incident, the gang abducted a pregnant lady in the area. Monday revealed that they trailed the pregnant victim and her husband to their residence before abducting the victim, leaving behind her husband.

The suspected kidnappers were apprehended by officers of the Police Intelligence Response Team (IRT). The unit is led by the Deputy Commissioner of Police, DCP Tunji Disu. Disu reportedly obtained permission from the IGP to unravel the mystery behind Jacob’s murder, although the victim’s family did not submit an official petition to the police.