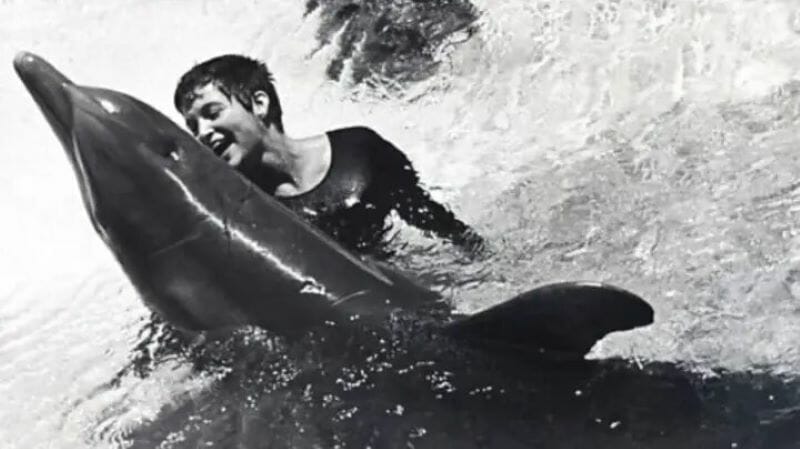 A dolphin seemed to have committed suicide after he was separated from a young woman, Margaret Howe Lovatt, who he had a ‘sexual relationship’ with.

In the early 1960s, young Margaret became part of a National Aeronautics and Space Administration, NASA-funded project to communicate with dolphins.

The idea was that, given that dolphins have brains that are at least as large as humans, we could develop techniques for communicating with extraterrestrials by learning how the intelligent species “talk” to each other.

Margaret, just 20 at the time, convinced project director Gregory Bateson into letting her work with the dolphins a neuroscientist, John Lilly, was keeping on the Caribbean island of St Thomas.

Margaret later said of the dolphins: “Sissy was the biggest. Pushy, loud, she sort of ran the show. Pamela was very shy and fearful. And Peter was a young guy. He was sexually coming of age and a bit naughty.”

Peter and Margaret developed a unique bond. He became jealous if she spent too much time with the other dolphins and the feeling was, at least to an extent, mutual.

Peter, more than his two companions, became quite skilled at forming English words by forcing air through his blowhole, although some words were more difficult than others.

Margaret recalled: “‘M’ was very difficult. My name. Hello ‘M’argaret. I worked on the ‘M’ sound and he eventually rolled over to bubble it through the water. That ‘M’, he worked on so hard.”

Peter and Margaret became closer, and the closeness became physical.

She said: “He was very, very interested in my anatomy. If I was sitting here and my legs were in the water, he would come up and look at the back of my knee for a long time. He wanted to know how that thing worked and I was so charmed by it.”

According to a notorious profile published in Hustler magazine, Margaret started giving Peter sexual relief whenever he became too sexually aroused to participate in her experiments.

She said: “It was just easier to incorporate that and let it happen. It was very precious, it was very gentle.

“It would just become part of what was going on, like an itch, just get rid of that, scratch it and we’ll be done and move on.”

“And that’s really all it was. I was there to get to know Peter. That was part of Peter.”

She explained: “[The sex] wasn’t private. People could observe it.”

But eventually, NASA sent a young astronomer, Carl Sagan, to report on the progress John Lilly was making and soon after that, the agency pulled the plug on the experiments.

And that spelled the end for Margaret and Peter’s strange relationship.

Soon after being separated from Lovatt, Peter drowned in what appeared to be a suicide.

Dolphins need to surface regularly to breathe, and he appeared to deliberately stay submerged until he suffocated.

It’s not an isolated event. Ric O’Barry from animal rights organisation The Dolphin Project explained: “Dolphins are not automatic air-breathers like we are. Every breath is a conscious effort.

“If life becomes too unbearable, the dolphins just take a breath and they sink to the bottom. They don’t take the next breath.”

Life was apparently too unbearable for Peter.

Margaret said: “He wasn’t going to be unhappy, he was just gone. And that was OK.”