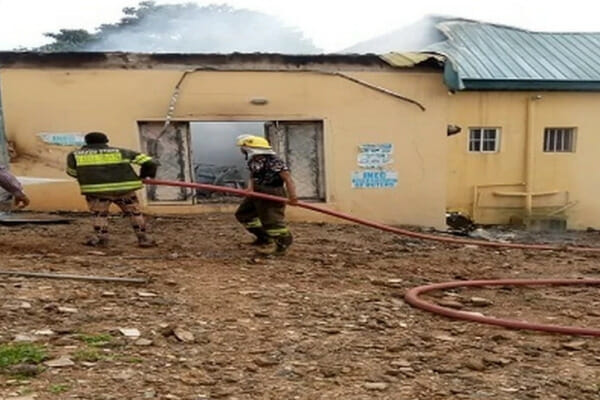 The Police Command in Enugu State says it has commenced investigation to resolve the mystery behind the fire that gutted the Independent National Electoral Commission (INEC) council office in the state.

It was earlier reported that INEC office complex, located in Awgu Local Government Area of Enugu State, was set ablaze by unknown arsonists on Sunday morning.

ASP Daniel Ndukwe, the Command’s Public Relations Officer, said this in a statement made available to NAN in Enugu on Sunday.

Ndukwe said: “The state’s Criminal and Investigation Department (CID) has commenced investigation into the fire incident.

“The state CID will unravel the mystery behind the fire incident that occurred at INEC Office in Awgu council area in the early hours of Sept. 19.

“Further development will be communicated, please,’’ he said.

Recall that the Chief Fire Officer in Enugu State, Chief Okwudili Ohaa, had earlier confirmed the fire incident to NAN in Enugu on Sunday.

Ohaa said that a distress call was received by the Enugu State Fire Service at the wee hours of Sunday, at about 1:30 a.m.

“Yes, as usual, when we received the distress call; our trucks and men at Ozalla Station quickly moved down to the scene.

“We equally mobilised fire trucks and firefighters from Enugu metropolis.

“Our prompt intervention saved the entire complex as only one office room was affected in the raging fire before it was extinguished,” he said.

The state fire chief said that the quick response of the firefighters gave credence to the establishment of fire stations in local government areas by Gov. Ifeanyi Ugwuanyi.

There are feelers that the arsonists climbed through the perimeter fence to gain access to the INEC complex.

NAN recalls that unknown arsonists had earlier in the year attacked the INEC Headquarters in Enugu State and INEC Office in Udenu Local Government Area as well.