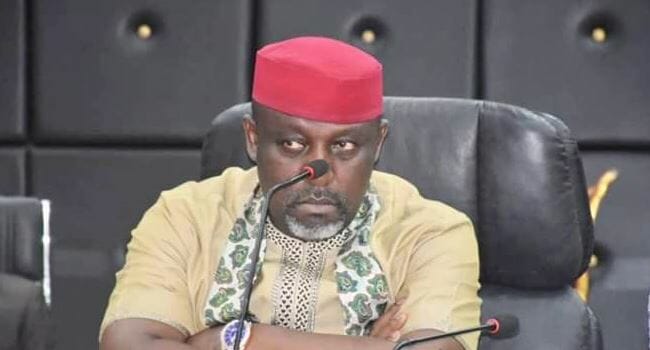 Biafra: Why I didn’t order my men to kill IPOB members – Okorocha

Senator Rochas Okorocha has revealed why he refused to order his men to shoot and kill members of the Indigenous People of Biafra, IPOB, during his tenure as governor of Imo State.

The former Governor called on the Buhari Government to sympathise with the youth and address their grievances.

Speaking further, the lawmaker called on the people of the South-East region to present a good reason they should be given the opportunity to produce the next President of the country in 2023.

Okorocha, who represents Imo West Senatorial District at the National Assembly, said this during ‘Conversation with Owelle Rochas Okorocha at 59 and Award of Icon of Service and Philanthropy,’ aired by NTA.

“When IPOB started, they came to Imo State when I was the governor, but I listened to them and understood their grievances.

“They asked me to join them, and I told them if they can convince me to have another (Biafra country) passport, I will join.

“I could have asked my men to shoot them as they were killed in Okigwe and other states, but no. I had to listen to know what they were going through.

“That is how the Nigerian government should treat the youths, sympathise with them. Treat them well,” Okorocha said.

Recently, many youths have been reportedly killed while many others have been arrested and jailed by Nigerian security operatives.

Speaking with newsmen on the recent happenings in the South East, especially Imo State, a security expert in Aba, Abia State, Dr. Maxwell Uchenna, apportioned most of the blames on the incumbent Imo State governor, Senator Hope Uzodinma.

According to him, the Governor is rather taking instructions from Abuja in the matters of security of his state instead of seeking a local solution to what he( Uchenna) described as a local problem.

“Hope Uzodinma is an Igbo man who should understand Igbo problems better,” he said.

“Listen, I’m not in any way in support of youths who go about killing security operatives and destroying government institutions should not be dealt with. But it’s wrong to kill them extrajudicially. It is unconstitutional to order the shooting of Nigerian youths without proper investigations and trials.

“In this same country we see bandits being arrested and detained by the security forces; we see Boko Haram members being integrated into the society by the government, so why will the South East be different? Why should the agitating youths be shot on sight with arresting and trying them in a court of competent jurisdiction? There’s insecurity everywhere in Nigeria and the government must rise to the occasion.

“I don’t know about Okorocha’s claim of having listened to the Biafra agitators during his tenure but all I can tell you is that it is unlawful for a sitting governor to order the shooting and killing of his people in order to look good before the central government and his political party.”