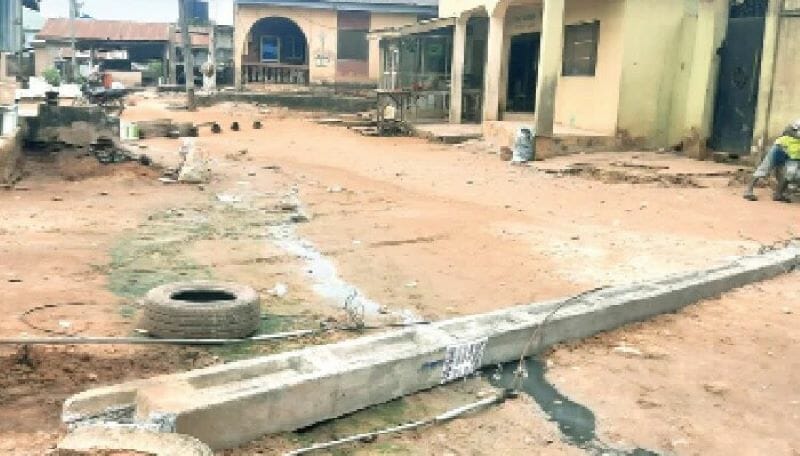 An Ikeja Electric worker identified simply as Tunde has been hospitalised after falling from a pole while disconnecting power supply on Palace Way, Abule, Arepo, in the Obafemi Owode Local Government Area of Ogun State.

It was gathered that the incident happened on Monday when the pole suddenly uprooted and fell with the victim still on it.

According to PUNCH, the victim was injured in the face, with blood gushing out from his mouth and nostrils.

A witness, who identified herself as Mrs Adeosho, said the worker had earlier disconnected the wire, but his boss ordered him to climb the pole again to bring the wire down.

“As I was speaking with my neighbour, I realised that the man came down from the pole, but their new marketer, who we were begging, ordered him to climb the pole again and bring the wire down instead of just disconnecting it.

“As the man was trying to pull the wire from the pole, I turned back to call the other neighbours to beg them. All of a sudden, we saw that the pole got uprooted from the ground and the man fell from it.

“Everybody scampered to safety because we all thought that he was electrocuted. It was after 10 minutes that people gathered around him and saw that he was still breathing but was injured and bleeding from the mouth and nostrils.

“He used a belt to tie himself to the pole and that was why he could not escape; people had to find something to cut the rope and rescue him to the Beachland Hospital on a motorcycle.”

Another witness, who identified herself as Mrs Abimbola, blamed the new marketer for the incident.

She said, “The other colleague of the victim had already warned that they should not bring the wire down because they had never brought it down before; they only used to disconnect and hang the wire somewhere on the pole, but their marketer started shouting at him that was he the one to control her and that was how the victim climbed the pole and unfortunately fell.”

The Ikeja Electric Public Relations Officer, Felix Ofulue, who confirmed the incident, said the firm was investigating it.

He said, “The safety team is still trying to establish the cause of the accident. What is confirmed is that it was not an electric shock and all the safety procedures were in place.”